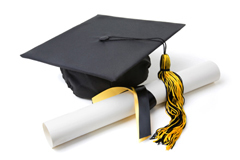 The Department of Physics has announced the recipients of the 2011 undergraduate awards.

The Outstanding Physics Major Award winners are Nicholas J. Mancinelli and Kimberly J. Schlesinger. Recipients of this award are selected based on a number of criteria including academic performance, contributions to the major, and potential for future success. It is the highest honor the department can award a graduate.

The Undergraduate Physics Research Award winner is Justin E. Browne. He was nominated by Prof. Xiaodong Tang. Selection is based on their contribution to the research within the department and the potential for future success.

These award winners will be acknowledged at the Dean's Award Luncheon on Friday, May 20 and at the Department of Physics commencement events on Sunday, May 22.