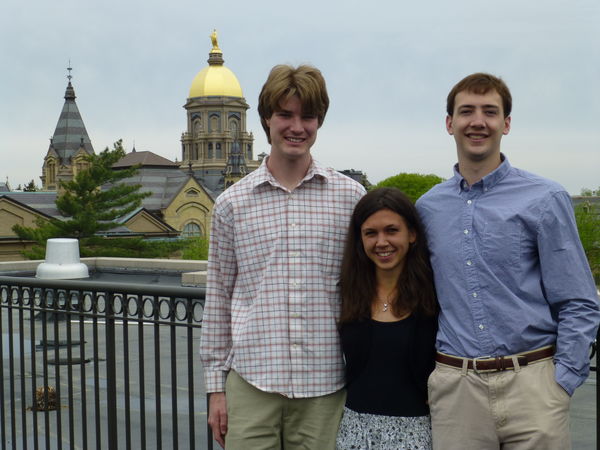 Each year the Department of Physics recognizes undergraduate students with a variety of awards. The 2014 honorees are Craig Cahillane, John Brems, and Grace Meikle.

Craig Cahillane has been selected to receive the Outstanding Physics Major Award. This award is given to a physics graduate selected by a number of criteria including academic performance, contributions to the major, and potential for future success. It is the highest honor the Department of Physics can award to one of its graduates.

Craig is in the Advanced concentration and the Honors Track, but also receiving a dual degree in Computer Science Engineering. Craig has done research under Prof. Morten Eskildsen since the fall of 2012 using neutron scattering to study superconducting vortex lattice reflections. Craig will be attending the Physics PhD program at Caltech next year.

John Brems will receive the Outstanding Undergraduate Research Award. This award is based on a student’s contributions to the research within the department, and their potential for future success. It is the highest research honor the Department of Physics can award to one of its graduates.

John is a Physics-in-Medicine major, who has been doing research with Prof. Sylwia Ptasinska since fall of 2011. John's work has been in understanding the mechanism of DNA/protein damage induced in thin films during X-ray exposure. John will be attending medical school in the fall at the University of Pennsylvania.

Grace Meikle will be recognized with the Paul Chagnon Award for Service. This award is given for demonstrated character and leadership, and for service to the University, the Department of Physics, and to his or her fellow physics majors.

Grace is a Physics major, with a second major in Chinese. Grace has been involved in summer research in India, China and Japan, and during the academic year with Prof. Prashant Kamat on nanotechnology and solar power. Grace will soon be starting a job with Schlumberger, a giant in the oil and gas industry.

The awards will be presented to the graduating seniors at the Dean's Luncheon on Friday, May 16.