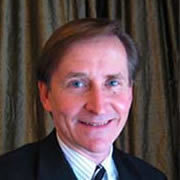 University of Notre Dame astrophysicist Peter M. Garnavich and a team of collaborators have used observations from the Hubble Space Telescope to provide new insights into the evolution of a nearby supernova, “SN 1987A," the nearest supernova to the Earth in 300 years.

Garnavich and his colleagues have combined images of SN 1987A with the Hubble Space Telescope images for the past 17 years to study the fading light and the collision of the fast-expanding gas with slowly moving material released from the star before it exploded.

After the initial explosion of a massive star, the fading light emitted from the ejected material of a supernova is due to the decay of radioactive elements produced in the explosion. But eventually the light emitted by a supernova becomes dominated by the collision of the fast-moving supernova ejecta with circumstellar gas. For the first time the transition from radioactive energy to energy generated by colliding gas has been observed in a supernova by Garnavich and his colleagues. Their observations show that an increase in brightness occurring since 2001 is the result of heat deposited by X-rays produced as the ejected material interacts with the surrounding material. A supernova is called a “remnant” when the light is primarily produced by the energy from colliding gas.

“1987A is so close, only 150,000 light years away, that we can see the results of the explosion in exquisite detail using Hubble," Garnavich said. “We are lucky that the Hubble Space Telescope has lasted long enough to watch the supernova turn into a supernova remnant.”

The transition phase has never been observed before because most supernovae are too far to still be visible a decade after explosion and nearby supernovae in the Milky Way are rare. SN 1987A is not even in the Milky Way, but was discovered in February 1987 in a companion galaxy to the Milky Way known as the Large Magellanic Cloud.

Garnavich is also a co-investigator on the largest Hubble project ever undertaken, in which astronomers are watching galaxies form and hunting for distant explosions. The astronomers are peering deep into the universe in five different directions to document the early history of star formation, galaxy evolution and to discover distant supernovae explosions. Distant supernovae explosions are important for understanding dark energy and the accelerating expansion of the universe.