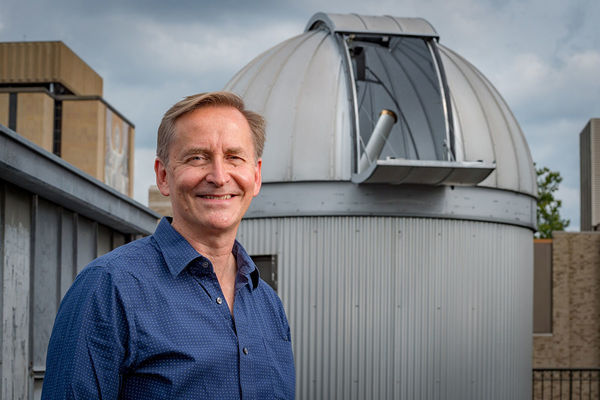 Before NASA’s Kepler space telescope was retired October 30, it captured the onset of a supernova, an exploding star in the constellation of Cancer. The data it collected from this nearest and brightest supernova, combined with data from ground-based satellites, resulted from an experiment first proposed by Notre Dame physicist Peter Garnavich.

Garnavich, professor and chair of the Department of Physics, is a co-author on three papers published by NASA on Friday (Nov. 30) about the research. The 130 scientists involved attempted to explain the unusual data revealed during the explosion of the supernova, SN 2018oh. It exploded 170 million years ago in the spiral galaxy UGC 4780, and was detected by the satellite on February 4, 2018. Ten days after Kepler detected the explosion, it was also discovered by the ground-based All-Sky Automated Survey for Supernovae. Soon observatories around the world were monitoring the supernova as part of the Kepler Supernova Experiment, which Garnavich developed to help solve the mystery of how stars explode.

He was the first to propose the use of the Kepler satellite to study supernovae. However, the first two years yielded no discoveries. Instead, astronomers at the University of Maryland found some odd light variations while studying the cores of galaxies, and these became the first crop of supernovae discovered by Kepler. “It was a crazy idea, so I was surprised when NASA approved my early proposals,” Garnavich said. “But by the end of the mission, the search for explosions became a major science driver for the mission.”

Garnavich and others formed the Kepler Extra-Galactic Survey to facilitate the search for explosions outside the Milky Way galaxy.  Other leaders of the group include Armin Rest, of the Space Telescope Science Institute in Baltimore, and Bradley Tucker, of the Australian National University, who earned his undergraduate degree in physics from Notre Dame.

NASA retired the Kepler space telescope after nearly 10 years of operation on October 30, following the exhaustion of fuel supplies. But from December 2017 to May 2018, while there was still fuel left, the Kepler team oriented the spacecraft toward two distinct patches of sky that were simultaneously observable from Earth by ground-based observatories. The telescopes were able to view both patches of sky teeming with galaxies. Each of these thousands of galaxies has billions of stars.

SN 2018oh is an example of a Type Ia supernova — the kind that astronomers use to track the expansion of the universe and probe the nature of the invisible “dark energy” that glues together the cosmos. A typical Type Ia supernova brightens over the course of three weeks before gradually fading away. But Kepler observed this particular supernova brightening rapidly a few days after the initial explosion — about three times faster than a typical supernova at this time period — before reaching peak brightness. Meanwhile, color details obtained by the Dark Energy Camera at Cerro Tololo Inter-American Observatory in Chile, and the Panoramic Survey Telescope and Rapid Response System at Haleakala Observatory in Hawaii, showed this supernova gleaming blue during this period of intensity, an indication of high temperatures.

For nearly a decade, scientists have been in search of a signal of a supernova similar to this one .Until Kepler, it was impossible to get an uninterrupted observations of the early stages of Type Ia supernovae.

In addition to Garnavich, the authors of these papers include scientists from dozens of institutions. Additional observatories providing valuable data to support the experiment include the All-Sky Automated Survey for Supernovae, a global network of telescopes managed by Las Cumbres Observatory in Goleta, California and headquartered at Ohio State University; Tsinghua-NAOC and Lijiang Telescopes in China; Konkoly Observatory in Hungary; Lick Observatory in Mount Hamilton, California; Las Campanas Observatory in Chile, and others. 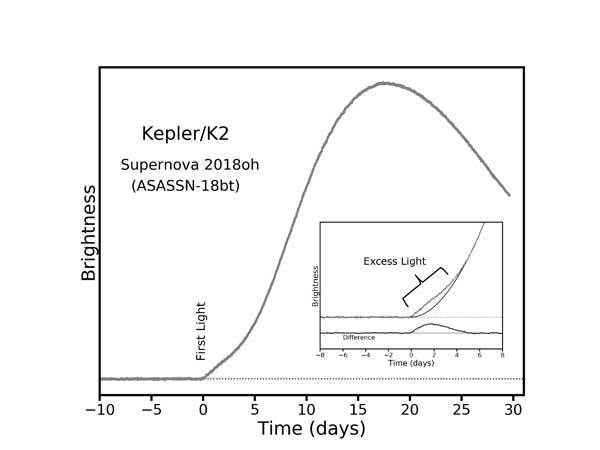 Originally published by Provided at science.nd.edu on December 05, 2018.