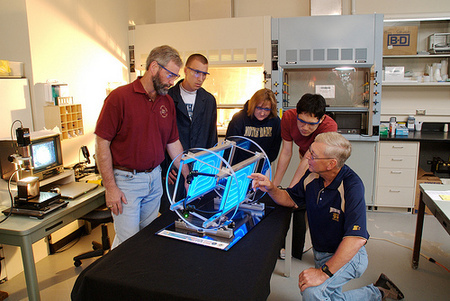 A group of physicists, teachers, high school students and parents, fresh from a day at physics boot camp, huddled around their butcher paper-topped table inside an Italian chain restaurant in Virginia and learned the finer points of elementary particle physics.

Restaurant-provided crayons in hand, Randy Ruchti, a Notre Dame particle physics professor, was diagramming high-energy particle production and decay and talking about quarks and gluons and protons and pions. The topic was well beyond the scope of most at the table, but he patiently outlined the theory in words everyone could understand.

“It just blew my mind,” Deborah Roudebush, a high school physics teacher in Fairfax, Virginia, remembers of that day in 2002. “There’s this mishmash of people, and there is Randy, a brilliant physicist, color coding these concepts with crayons at a table in the middle of a Macaroni Grill.”

Ruchti was in the midst of what some describe as a brilliant and successful idea — not about quantum chromodynamics, but about how to spread excitement for particle physics. When Ruchti encounters a so-called “unsolvable” problem, he has an uncanny knack for working with others to quietly devise a creative solution. In 1993, nine years before meeting Roudebush, the problem he saw was the impending demise of particle physics research in the United States.

After this revelation, Ruchti and a group of others worked together steadily over several years, refining the idea that in 1998 became QuarkNet, a program that brings university-level research to high school physics teachers in various centers across the country.