An observation made by the Compact Muon Solenoid (CMS) experiment at CERN represents yet another important milestone reached in the scrutiny of the Higgs boson and its interactions with Standard Model particles. Members of the Notre Dame CMS group include Professors Michael Hildreth, Colin Jessop, Kevin Lannon, Nancy Marinelli, Randal Ruchti and Mitchell Wayne of the Department of Physics are all members of the CMS collaboration.

On July 4, 2012, two experiments at CERN’s Large Hadron Collider (LHC), ATLAS and CMS, independently reported the discovery of the Higgs boson. The announcement created headlines worldwide: the discovery confirmed the existence of the last missing elementary particle of the Standard Model, half a century after the Higgs boson was predicted theoretically. At the same time the discovery marked the beginning of an experimental program aimed at determining the properties of the newly discovered particle. On August 28, at a seminar at CERN, the CMS collaboration announced yet another milestone in that program, after a recent publication that announced the first observation of the direct Higgs boson coupling to the heaviest Standard Model particle, the top quark.

While the direct decay of the Higgs boson to bottom quarks is actually the most frequent one of all possible Higgs decays, it has been a real experimental challenge to observe it. This is because there is an overwhelmingly large number of other Standard Model processes (called background) that can mimic the experimental signature characterized by the appearance of a bottom and an anti-bottom quark. Therefore, it was necessary to focus on particular signatures where a Higgs boson is produced in association with a vector boson (a W or Z particle, see the figure below), producing a significant reduction in the background. Because this process  is quite rare, it was necessary to sift through a large number of collisions to find the signal. Fortunately, the LHC’s great performance in 2016 and 2017 made this possible.

“This observation represents the culmination of an extraordinary effort to confirm a critical component of the Standard Model of particle physics. In addition to the utilization of cutting edge technology in our detector systems used to observe the decays we have also applied modern machine learning techniques to the data analysis. This proved essential in separating these events from other types of processes that have similar signatures,” said Notre Dame Professor Colin Jessop.

The Notre Dame group is responsible for the design, construction and operation of the calorimeters used to detect the b-quarks decaying to jets. In addition the group designs and maintains elements of the trigger system used to sift through the millions of events in real time to collect the Higgs decays. Finally the group contributes to the data analysis needed to discriminate the Higgs to b-quark decays from other processes with similar signatures and to the simulation of the events needed to evaluate the selection algorithms. 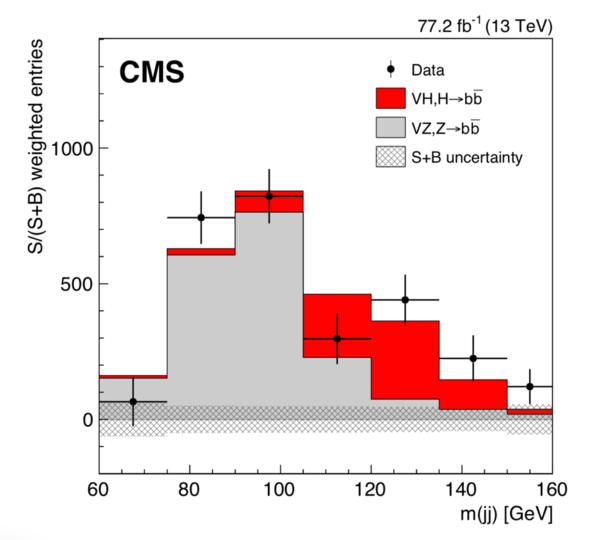 This figure shows a distribution of the reconstructed mass of the Higgs Boson using its b-quark decays. The red histogram shows the contribution from the Higgs boson while the gray distribution comes from processes with similar signatures.

With this observation of the Higgs boson coupling to the bottom quark, together with earlier observations of the Higgs coupling to the top quark and the tau lepton and therefore to all three of the heaviest known fermions, the CMS physics program to characterize and more fully understand the Higgs boson has taken another important step. While the strength of the measured couplings is consistent with the Standard Model expectation, the precision of the measurements still leaves room for contributions from new physics. In the coming years, much more data will be collected and the precision will be improved, in order to see if the Higgs reveals the presence of physics beyond the Standard Model. 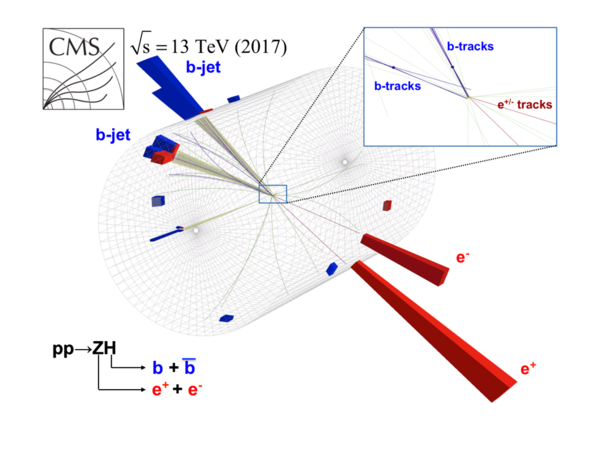 The figure above represents a candidate event showing the associated production of a Higgs boson and a Z boson, with the subsequent decay of the Higgs boson to a bottom quark and its antiparticle.

Originally published by Colin Jessop, Ph.D. at science.nd.edu on August 29, 2018.