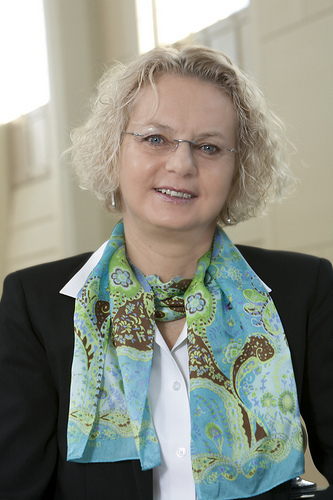 The past decade has seen the emergence of the field of spintronics, aimed at increasing the efficiency of information processing and computer memories. The idea behind spintronics is to harness the magnetic property of the electron, referred to as its spin. This property can then be used, in addition to the electron charge, for increasing the functionality of the semiconductor computer chip, in terms of its capacity to store and process information.

Margaret Dobrowolska, professor of physics at the University of Notre Dame, has led a team of collaborators from the University of Notre Dame, the University of British Columbia and Berkeley Lawrence National Laboratory in an effort which has succeeded in identifying the mechanisms responsible for ferromagnetism in the semiconductor GaMnAs. This new understanding provides a handle for planning new strategies aimed at increasing its critical temperature, with an eye of making it ferromagnetic at and above room temperature, and thus opening the way toward realistic spintronic devices.

The alloy GaMnAs is an ideal candidate for spintronic applications. The bottleneck, however, is that it loses its magnetic properties at room temperature. The highest critical temperature at which ferromagnetism (and thus the desirable spin properties of GaMnAs) has so far been achieved is about 200 kelvins (about -99.6oF). The reason for this obstacle is that the properties of GaMnAs have so far not been fully understood, preventing realistic strategies for fabrication of this material with higher critical temperatures.

This achievement is featured in the current issue of Nature Materials in an article, “Controlling Curie temperature in (Ga,Mn)As through location of the Fermi level within the impurity band” by  M. Dobrowolska, K. Tivakornasithorn, Y.-Y. Zhou, X. Liu, and J.K Furdyna (Notre Dame), M. Berciu (University of British Columbia, and K.M. Yu and W. Walukiewicz (Berkeley Lawrence National Laboratory.