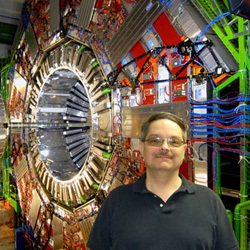 Don Lincoln, adjunct professor of physics and staff scientist at Fermi National Accelerator Laboratory, was the featured "hero in education" on the Daily Edventures blog on February 23. The blog features an educator every day for 365 days and comes from Microsoft Partners in Learning, a global wide initiative focused on improving teaching and learning by helping educators and school leaders connect, collaborate, create, and share ideas so students can reach their full potential.

Lincoln talked about how he became a physicist and his views on education. Here is an excerpt from the interview:

What drew you to your field? Why is it important to you?

"What brought me to science was my insatiable curiosity. I am simply one of those people who can't leave a mystery unsolved. That's what made me a scientist. What drives me to communicate science is that when I was a kid, this was no less true. However, I came from a non-academic family. For instance, my Dad never finished high school. My mom (who did) tells me that by about junior high, she was finding it hard to answer my questions. And the town I lived in was rural and poor. The teachers knew more than my parents, but it didn't take long for me to start pushing them beyond what they had learned."

"So I turned to scientists who had written popularizations: Carl Sagan, James Burke, George Gamow, Isaac Asimov, etc. It is because of people like that that I eventually became a scientist. So I'm paying a debt. Somewhere, there is some kid in some isolated town, with nobody around them who can answer their questions who might find in my writings something that will open an entire new world to them."

You can read the complete interview on Daily Edventures.com.

You can also read the cover article title "Dark Matter" that Lincoln wrote which appears in the current issue The Physics Teacher.