The CMS experiment at CERN’s Large Hadron Collider (LHC) has recorded its first Lead-Lead collisions at a centre-of-mass energy of 2.76 TeV per nucleon pair, marking the start of its heavy ion research programme. Physicists around the world expect a wealth of new results and phenomena from these collisions, which occur at energies 14 times higher than previously achieved by the Relativistic Heavy Ion Collider (RHIC, Brookhaven, USA).

At 11:20:56, on 8th November the LHC Control Centre declared stable colliding beams of heavy ions. CMS immediately detected the first collisions, each producing thousands of particles whose trajectories are reconstructed in the CMS silicon detectors and whose energies are measured in the calorimeters. Moments later, the data were analysed and the first images of these events were produced. 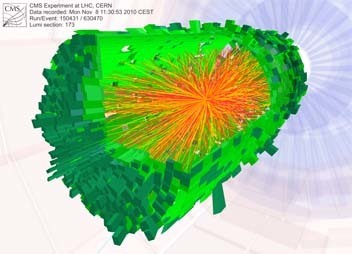 “We are very excited to see the first heavy ion collisions in CMS. The data will allow us to study hot matter at much higher temperatures than ever before” said CMS heavy-ion run operations manager Bolek Wyslouch. “I am very happy for the students and the physicists who have worked so much to prepare CMS for heavy-ion collisions and will certainly benefit from the richness of the physics.”