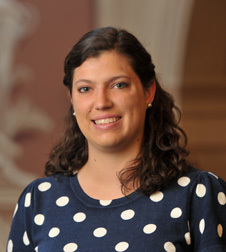 Physics graduate student Stephanie Lyons cannot remember a time in which she was not interested in the scientific world. Her first love — all the way back in the second grade — was the teeming world of insects. Now, though, rather than looking down, her gaze is focused upwards: on the stars.

"My research focuses on the reactions that occur in stars that give them energy as well as produce the elements we see here on earth and in our universe," Stephanie explains. "Just as a biologist might use a microscope to investigate the mechanisms that make a cell work, as a nuclear physicist, I use a device to help me probe various mechanisms that make a star work — one that gives me an inside view of a star."

That device is an enormous, new particle accelerator in Notre Dame’s Nieuwland Hall of Science. Funded by the National Science Foundation (NSF), the 5MV accelerator is the first accelerator the NSF has funded in nuclear physics in nearly a quarter century. It is housed inside a new 40-foot-tall tower located above the existing Nuclear Science Laboratory (NSL) in the center of Nieuwland.

Stephanie’s adviser is Prof. Michael Wiescher, the Frank M. Freimann Chair of Physics. They met while, as an undergraduate, she participated in a summer Research Undergraduate Experience (REU) at Notre Dame — an experience that was the impetus for her decision to attend graduate school at the University.

At the end of her first year of graduate studies, Stephanie was one of five students in the nation awarded a fellowship from the Department of Energy’s (DOE) National Nuclear Security Administration. In addition to providing her with full and generous funding for five years of study, a key component of the fellowship was the opportunity for a three-month practicum at one of DOE’s national defense laboratories. Stephanie chose the famed Lawrence Livermore Laboratory in California.

She explains that her project was part of the Laboratory’s major focus on ignition, more commonly known as fusion.

"During my 12 weeks at Livermore," Stephanie says, "I was based at the National Ignition Facility (NIF). I created a model of a typical ignition capsule and simulated what the effects on output would be for the various scenarios. Comparing my results to the current calculations helped us to understand what the capsule may be experiencing. From there, I began coupling my capsule model to the model of one of the many diagnostic detectors in the ignition facility. This will be the first ‘source to signal’ simulation to be done with NIF."

Back on campus this term, Stephanie is continuing her work on ignition issues and working towards performing the first commissioning experiments on Notre Dame’s new accelerator. Her thesis work is intended to not only advance our knowledge of how various isotopes are made, but to finalize the acceptance and reliability of the new accelerator.

She is also back to work as a founder and president of the campus chapter of the Association for Women in Science.

"My goals for our local chapter" she says, "are to establish a community of support for women in the science. In some fields — like physics — we are an underrepresented group. We are establishing a forum for our women graduate students to discuss topics of common interest."

The Notre Dame chapter will include activities for professional development, outreach, and social activities.