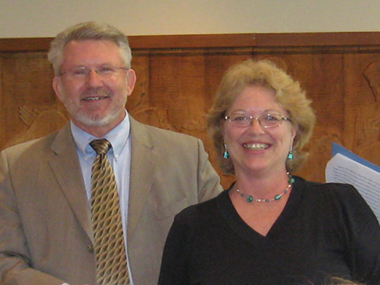 Shari Herman of Physics has been selected to receive the 2011 Graduate Administrative Assistant Award. In making the announcement, Sterling emphasized that, “the selection panel was impressed with the excellence of Shari’s achievements in all aspects of Physics graduate students’ experience. We learned that Shari is involved in such diverse activities as helping to design and produce a recruiting poster; building a data base for Physics’ 500 Ph.D. alumni/ae; and organizing a Thanksgiving Day celebration for international students to teach them about American culture.”

The chair of Physics, Prof. Mitch Wayne, extols Herman’s contributions as well: “Shari is deeply involved in every aspect of our graduate students’ experience at Notre Dame—from the moment they submit their application to the Graduate School until the day they walk across the stage with their doctoral diploma in hand. We have been working hard, and with success, to both strengthen and grow our graduate program, and Shari has played an important role in our progress.”

Wayne adds that Herman has a special rapport with graduate students in the department. “A wonderful sign of the students’ love and respect for her is seen when they pass an important milestone, such as their candidacy exam. Usually, the first thing a student does after passing is to run down to the department office and share the good news with Shari.”

Sterling echoed the sentiment that Herman’s contributions are exemplary on both personal and programmatic levels.

The Graduate Administrative Assistant Award was presented at the Graduate School Appreciation Luncheon on Monday, May 23.