On the outskirts of our galaxy, a cosmic tug-of-war is unfolding—and only NASA’s Hubble Space Telescope can see who’s winning.

The players are two dwarf galaxies, the Large Magellanic Cloud and the Small Magellanic Cloud, both of which orbit our own Milky Way Galaxy. But as they go around the Milky Way, they are also orbiting each other. Each one tugs at the other, and one of them has pulled out a huge cloud of gas from its companion.

Called the Leading Arm, this arching collection of gas “leads” the motion of the Magellanic Clouds and connects them to the Milky Way. Roughly half the size of our galaxy, this structure is thought to be about 1 or 2 billion years old.

The enormous concentration of gas is being devoured by the Milky Way and feeding new star birth in our galaxy. But which dwarf galaxy is doing the pulling, and whose gas is now being feasted upon? After years of debate, scientists now have the answer to this “whodunit” mystery.

Collaborators of a research study which appeared in the Feb. 20 issue of The Astrophysical Journal include members of a University of Notre Dame research group, led by Chris Howk and Nicolas Lehner. Both study how galaxies form and evolve, and are particularly interested in understanding the impact of the competing processes of large-scale outflows and accretion in galaxy halos on galaxy evolution. For example, without fuel, galaxies would not be able to sustain their star formation over 10 billion years; a source of this fuel, or gas, is in the halos of galaxies. One way to trace the origin of this gas is by using its chemical composition in those halos. Determining their chemical composition and enrichment are major goals of the Howk and Lehner research group.

“Directly observing gas accretion onto galaxies has been difficult, and tracing back the origin of this accreted gas even more so,” said Lehner, research associate professor in the Department of Physics at Notre Dame. “This is a case study where we now know the origin and the fate of the gas providing invaluable information for understanding how galaxies get their gas to fuel star formation over billions of years.” 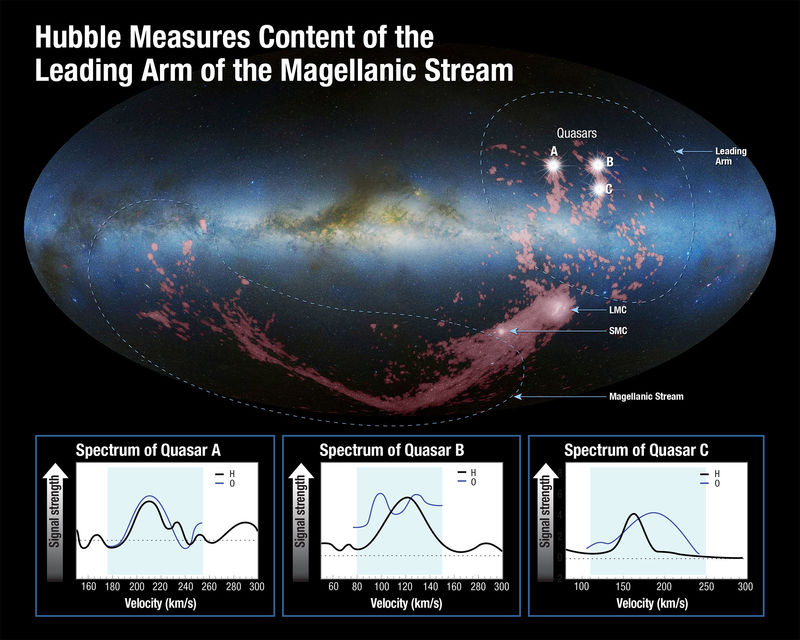 In a cosmic tug-of-war between two dwarf galaxies orbiting the Milky Way, only NASA’s Hubble Space Telescope can see who’s winning. The players are the Large and Small Magellanic Clouds, and as they gravitationally tug at each other, one of them has pulled out a huge amount of gas from its companion. This shredded and fragmented gas, called the Leading Arm, is being devoured by the Milky Way and feeding new star birth in our galaxy. But which dwarf galaxy is doing the pulling, and whose gas is now being feasted upon? Scientists used Hubble’s ultraviolet vision to chemically analyze the gas in the Leading Arm and determine its origin. After years of debate, we now have the answer to this “whodunit” mystery.

This research is a follow-up to 2013 work by lead researcher Andrew Fox of the Space Telescope Science Institute in Baltimore, which focused on a trailing feature behind the Large and Small Magellanic Clouds. This gas in this ribbon-like structure, called the Magellanic Stream, was found to come from both dwarf galaxies. The latest work focuses on its counterpart, the Leading Arm. Unlike the trailing Magellanic Stream, this tattered and shredded “arm” has already reached the Milky Way and survived its journey to the galactic disk.

The Leading Arm is a real-time example of gas accretion, the process of gas falling onto galaxies. This is very difficult to see in galaxies outside the Milky Way, because they are too far away and too faint. “As these two galaxies are in our backyard, we essentially have a front-row seat to view the action,” said collaborator Kat Barger at Texas Christian University, who was previously a postdoctoral National Science Foundation (NSF) fellow at Notre Dame.

In a new kind of forensics, the research collaborators used Hubble’s ultraviolet vision to chemically analyze the gas in the Leading Arm. They observed the light from seven quasars, the bright cores of active galaxies that reside billions of light-years beyond this gas cloud. Using Hubble’s Cosmic Origins Spectrograph, the scientists measured how this light filters through the cloud.

In particular, they looked for the absorption of ultraviolet light by oxygen and sulfur in the cloud. These are good gauges of how many heavier elements reside in the gas. The team then compared Hubble’s measurements to hydrogen measurements made by the NSF’s Robert C. Byrd Green Bank Telescope at the Green Bank Observatory in West Virginia, as well as several other radio telescopes.

“With the combination of Hubble and Green Bank Telescope observations, we can measure the composition and velocity of the gas to determine which dwarf galaxy is the culprit,” explained Barger.

After much analysis, the team finally had conclusive chemical “fingerprints” to match the origin of the Leading Arm’s gas. “We’ve found that the gas matches the Small Magellanic Cloud,” said Fox. “That indicates the Large Magellanic Cloud is winning the tug-of-war, because it has pulled so much gas out of its smaller neighbor.”

This answer was possible only because of Hubble’s unique ultraviolet capability. Because of the filtering effects of Earth’s atmosphere, ultraviolet light cannot be studied from the ground. Gas from the Leading Arm is now crossing the disk of our galaxy. As it crosses, it interacts with the Milky Way’s own gas, becoming shredded and fragmented.

This is an important case study of how gas enters galaxies and fuels star birth. Astronomers use simulations and try to understand the inflow of gas in other galaxies. But here, the gas is being caught red-handed as it moves across the Milky Way’s disk. Sometime in the future, planets and solar systems in our galaxy may be born out of material that used to be part of the Small Magellanic Cloud.

As the team looks ahead, they hope to map out the full size of the Leading Arm—something that is still unknown.

The Hubble Space Telescope is a project of international cooperation between NASA and ESA (European Space Agency). NASA’s Goddard Space Flight Center in Greenbelt, Maryland, manages the telescope. The Space Telescope Science Institute (STScI) in Baltimore, Maryland, conducts Hubble science operations. STScI is operated for NASA by the Association of Universities for Research in Astronomy, in Washington, D.C.

Originally published by Provided at science.nd.edu on March 22, 2018.