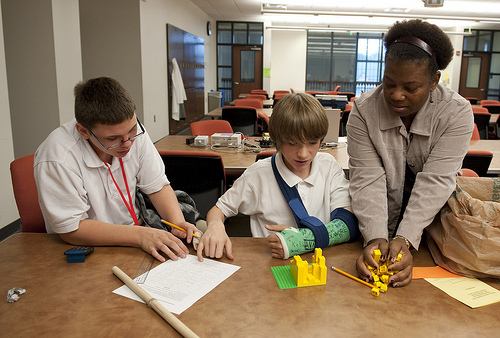 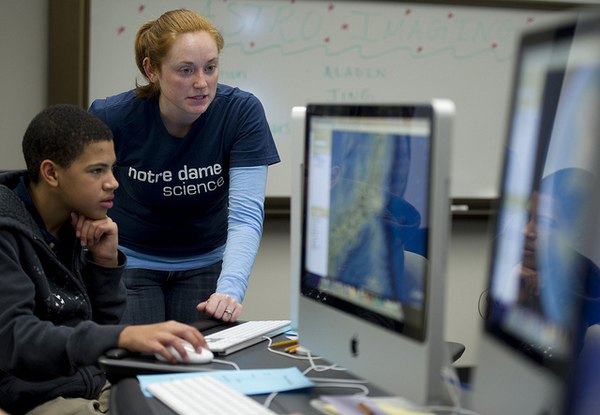 Some 140 eighth graders from Edison Intermediate Center in South Bend visited the Notre Dame campus during fall break to get a taste of college life, especially science study. The annual event is part of the Campus Tours Project, a collaboration among the Department of Chemistry and Biochemistry, Department of Physics, Department of Biological Sciences, South Bend Community School Corporation and the City of South Bend.

“The goal is to get students engaged in going to college, giving them a vision for doing that, hopefully influencing them to consider careers in STEM (Science, Technology, Engineering and Mathematics),” says Karen Morris, Outreach Coordinator in the Department of Chemistry and Biochemistry. “We are trying to influence them to see themselves in college,” says Morris, explaining that many of the students would be the first in their families who attended college. “We want them to get to understand they can do this.”

At Notre Dame, city officials urged the students to stay in school and stay in the community when they graduate. After the initial welcoming and rationale for the day, the fun began in groups of four as students participated in an engineering activity, designing and building a craft to land an egg safely on the floor from the second-floor galleria in the Jordan Hall of Science. Six of the 17 eggs arrived intact.“That activity gets them engaged in the scientific thinking we want them to do plus helps them to work in collaborative groups,” Morris says. “They take notes in a notebook which also supports the science curriculum in the classroom.”

About 70 students came on each of two days, allowing them to be divided into groups for a one-hour course on their chosen science topic. Choices were an astronomy-based project by the Joint Institute for Nuclear Astrophysics (JINA); nanotechnology with a scanning tunneling microscope by the Notre Dame extended Research Community (NDeRC); a polymer project by the Chem Demo team; particle physics by NDeRC and QuarkNet; identification of skeletal remains by Biological Sciences; and a snack-making food math activity by the Riverbend Community Math Center.