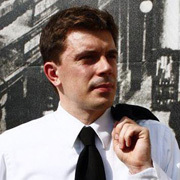 Andras Libal, who earned his Ph.D. in Physics at Notre Dame in 2007 and won the department’s Best Thesis Award, has published a book with the material. “Simulation Studies of non-equilibrium collective phenomena in colloids” is a synthesis of four papers Libal wrote on the subject. His adviser was Boldizsar Janko.

After postdoctoral work at Johns Hopkins University and at the University of Antwerp in Belgium, Libal returned to his native Romania in 2009. He is an associate professor in the Computer Science Department at the Babes-Bolyai University, where he earned his undergraduate degree.