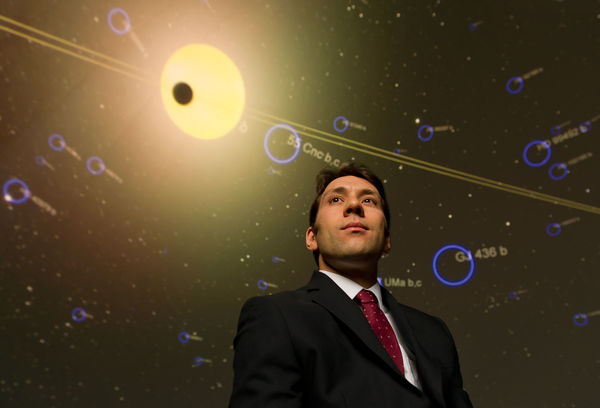 NASA has named University of Notre Dame astrophysicist Justin Crepp a Kepler Participating Scientist. As one of only 11 scientists in the country selected to participate, Crepp will advance the goals of the Kepler Mission by seeking to discover extrasolar planets, some of which may be in the habitable zone.

Crepp, the Freimann Assistant Professor of Physics, will utilize the world’s premier diffraction-limited facility, the adaptive optics system at the Large Binocular Telescope in southeastern Arizona, to make observations and significantly enhance and expand Kepler’s imaging program. His work will aim to provide a statistically significant determination of the frequency of Earth-size planets in and near the habitable zone of host stars.

He will expand the number of Kepler Objects of Interest (KOI) and improve the contrast levels achieved at the closest angular separations for high-priority stars of any apparent magnitude. His work, titled “Deep AO Imaging Validation of KOIs using the Large Binocular Telescope,” will result in a robust validation of small, terrestrial planets, and by accessing more stars will reduce false-positive probabilities for individual systems and ultimately decrease uncertainty in the determination of terrestrial planet occurrence rates.

“Professor Crepp’s involvement with the Kepler Mission is a testament to the outstanding work he has been doing in exoplanet searches, and is one more indication of Notre Dame’s success in building a world-class astrophysics program,” said Chris Kolda, chair of the Department of Physics at the University of Notre Dame.

Under NASA’s Discovery Program, the Kepler Mission represents the agency’s first mission dedicated to the discovery of extrasolar planets. Kepler continuously monitors more than 100,000 stars in about a 100-square-degree field of vision near the constellation Cygnus.