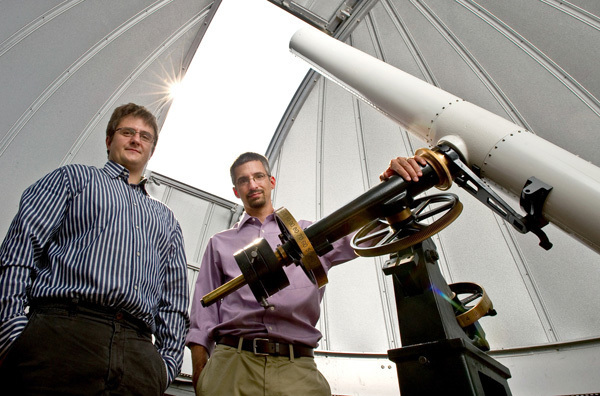 The Milky Way will have the fuel to continue forming stars, thanks to massive clouds of ionized gas raining down from its halo and intergalactic space. This is the conclusion of a new study by Nicolas Lehner and Christopher Howk, faculty in the Department of Physics at the University of Notre Dame. Their report, “A Reservoir of Ionized Gas in the Galactic Halo to Sustain Star Formation in the Milky Way,” will be published in Science on August 26.

Using the Cosmic Origins Spectrograph, one of the newest instruments on the NASA/ESA Hubble Space Telescope, these researchers measured for the first time the distances to fast-moving clouds of ionized gas previously seen covering a large fraction of the sky. These fast-moving clouds reside in the distant reaches of the Milky Way and contain huge quantities of gas.

The Milky Way would rapidly change its gas into stars if no supply of new matter were available to replenish the gas. Astronomers have hypothesized that the ionized fast-moving gas clouds could be this reservoir of gas, but it was not known if they were interacting with the Milky Way.

“Our findings explain why the Milky Way can keep having star formation,” Lehner says. “Knowing the distances to these clouds tells us where the gaseous fuel is for forming stars over billions of years.”

Gas clouds can be identified and studied because elements in the cloud absorb small amounts of the light from a star or other light source as it passes through a cloud on its way to the Earth. The characteristic “fingerprint” left in the spectrum allows astronomers to determine the properties of the gas.

Earlier studies of these fast-moving ionized clouds used light from quasars, which are too far away to mark the clouds’ locations. To solve the problem, Lehner and Howk identified 27 stars around the Milky Way, whose distances were known, and used the Hubble to take line-of-sight readings of light coming from them.

Results from the stellar sample showed the ionized clouds largely resided in the Milky Way’s halo. The authors concluded that these flows of ionized gas are within about one Galactic radius (40,000 light years) of Earth. The new Hubble observations revealed the presence of ionized gas in half the stellar sample, comparable to the fraction observed toward more distant quasars.

The gas clouds are not uniformly distributed around the Galaxy, but rather collected in different areas. They cover only part of our Galactic sky, analogous to the partial coverage of the sky on a partly cloudy day on Earth. This research also confirmed models that predicted gas falling into the Milky Way slows as it approaches. Clouds closer to the Galaxy seem to have been decelerated and do not move as fast as those farther away, much like a meteorite slowing as it enters the Earth’s atmosphere.

“We know now where is the missing fuel for Galactic star formation.” Lehner concludes. “We now have to learn how it got there.” 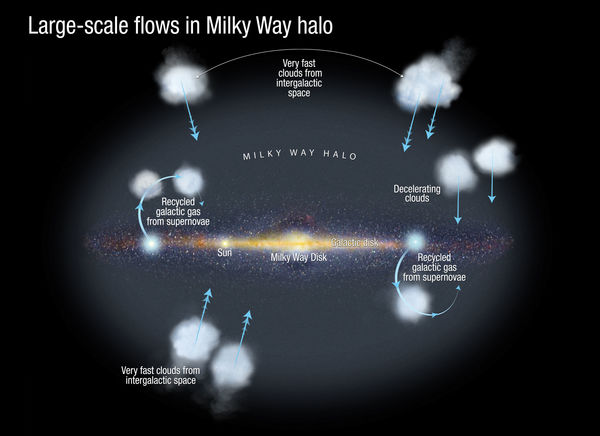 This artist’s rendition depicts the large-scale flows in the Milky Way’s halo. With the Cosmic Origins Spectrograph and Space Telescope Imaging Spectrograph on-board the Hubble Space Telescope, Nicolas Lehner and Christopher Howk of the University of Notre Dame determined the fast clouds of ionized gas were in front of distant stars in the Milky Way’s halo. Image Credit: Ann Feild/STScI