Most research within the field of physics focuses on predicting the future. But how rapidly does our knowledge of the past deteriorate? 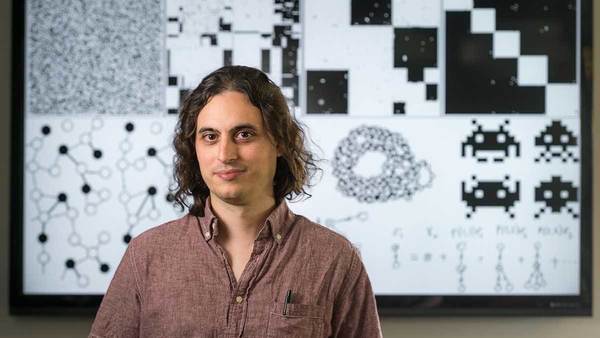 Consider a sugar cube dissolving in water. “If you know the initial shape of the sugar cube, it is very easy to predict the concentration of sugar over time,” said Dervis Can Vural, assistant professor in the Department of Physics at Notre Dame. “But given the final state—a sweet cup of water—it is very difficult to ‘retrodict’ the original shape of the sugar cube. The process is irreversible and you’ve lost that information.”

He and Notre Dame physics doctoral student Nathaniel Rupprecht defined “retrodiction entropy,” a quantity that measures the amount of information about the past states of the world as provided by measurements of a present state. In thermodynamics, entropy is a measure of how organized or disorganized energy is within a system of molecules.

They explore retrodiction in their latest research, “Limits on Inferring the Past,” published Friday (June 29) in Physical Review E. “In this paper, we assume that we know something about how a random system may have started, and use data about what it looks like now to compute the entropy of the system moving backwards in time to its starting point,” said Rupprecht.

They studied systems consisting of multiple particles within a potential energy landscape that also undergo random thermal motion. Examples of such systems include trapped gasses, astronomical bodies spreading in space, or droplets of ink dissolving in water.

The researchers found a close a relationship between thermodynamic entropy and retrodiction entropy. Furthermore, they discovered that certain kinds of systems steadily degrade information, decreasing the chance over time that the initial state of the system can be inferred. Other systems, however, always retain memory of their initial state.

Rupprecht and Vural then investigated the relationship between a state of chaos and retrodiction. Chaos refers to a sensitive dependence of final states to initial states, popularly described as “the butterfly effect,” where a butterfly flapping its wings is said to have caused a storm a week later. Specifically, the researchers studied a simple model system called the logistic equation, which may or may not be chaotic depending on the value of one parameter. Using this equation allowed them to determine how retrodictable the system is when it is chaotic, and when it is not.

“While one might expect that chaos makes things more difficult in terms of retrodiction, what we found is there is a sweet spot, right between order and chaos,” Vural said. “We were most successful in retrodiction right as the system transitions into chaos.”

Though Vural and Rupprecht were most concerned with the foundational questions they could answer with their research, their mathematical proofs may have wide-reaching applications.

“Many astonishing facts about the origin of the universe, evolution of life, or the history of civilizations will never be directly observed, but will only be inferred in the light of their manifestations in the present,” Vural said. “It is important to know what our limits of knowing the past are.”

Originally published by Deanna Csomo McCool at science.nd.edu on June 29, 2018.