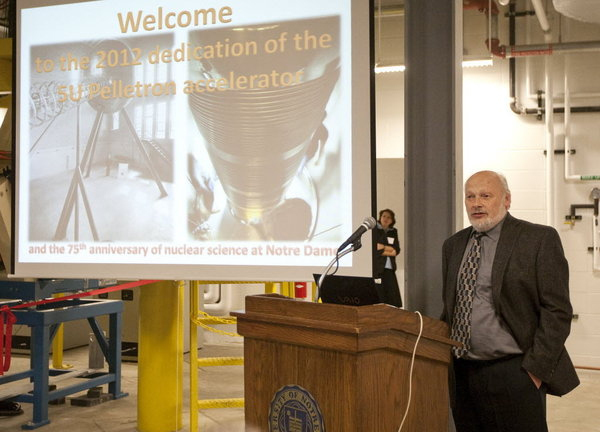 Using a new $4 million particle accelerator, University of Notre Dame researchers are probing the mysteries of the universe.

"We're focusing on the origin of the elements in the universe," physics professor Michael Wiescher said.

The 5MV vertical high-beam intensity accelerator was installed on campus this year. It's housed in a 40-foot-tall tower above the Nuclear Science Laboratory in Nieuwland Science Hall. Funding for the accelerator came from a $4 million National Science Foundation grant, with the university funding an additional $4 million to build the space to contain the device.

The machine is used to simulate reactions that take place in the stars. A particle accelerator uses electromagnetic fields to propel charged particles to high speeds and to contain them in well-defined beams. Wiescher notes that most of the human body is composed of hydrogen -- about half of which was formed 12 to 13 billion years ago in the Big Bang and the rest in later generations of stars.

Using the device, researchers accelerate a charged particle, shoot it into a gas and study the reaction in the gas.

ISNAP is involved in basic science research, as well as interdisciplinary efforts that involve applying nuclear physics in materials analysis and radiation chemistry.

JINA is a collaboration among Notre Dame, Michigan State University and the University of Chicago, with a number of other institutions around the globe also involved in the research. JINA is designed to foster an interdisciplinary approach to nuclear astrophysics.

About 10 professors and faculty researchers will regularly use the new  accelerator, but researchers from many other universities and institutions also will visit campus to use it, Wiescher said.

He and other faculty members also expect to work with area companies involved in production of artificial joint implants. They inject radioactive elements into the artificial joints and then use the accelerator to measure wear and tear.

The 5MV is the latest in a series of particle accelerators that have been used for research at Notre Dame, with the first one installed way back in 1936. Two later accelerators -- one from the 1960s and another from the 1990s -- remain in use in Nieuwland.

This story appeared in the November 1, 2013 issue of the South Bend Tribune.