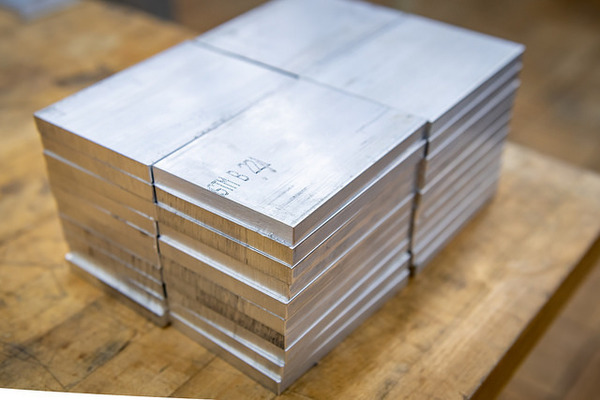 The humble-looking stack of 200 postcard-sized rectangles of aluminum that rested on a table this past summer, next to the Physics Machine Shop’s newest piece of equipment, will eventually have a job to brag about: helping explain the Standard Model of Physics.

Nearby in the shop, 115 Nieuwland Hall, tool-and-die maker Matthew Sanford machined a larger slab of aluminum with modifications designed by mechanical engineer Randy Hamper from the Engineering and Design Core Facility (EDCF). This piece of metal may lead to the discovery of a life-supporting planet.

Deciphering the physical secrets of the universe that are beyond human comprehension doesn’t come easy. Understanding mysteries requires research, planning, and equipment—lots of equipment—large and small.

Physicists at the University of Notre Dame are developing groundbreaking devices, but many of their inventions begin as raw materials that are shaped, cut, tooled, engraved, and soldered with precision in the Physics Machine Shop. The variety of projects manufactured by the three-member staff creates an atmosphere in the shop that manager David Futa likened to an adult sandbox. 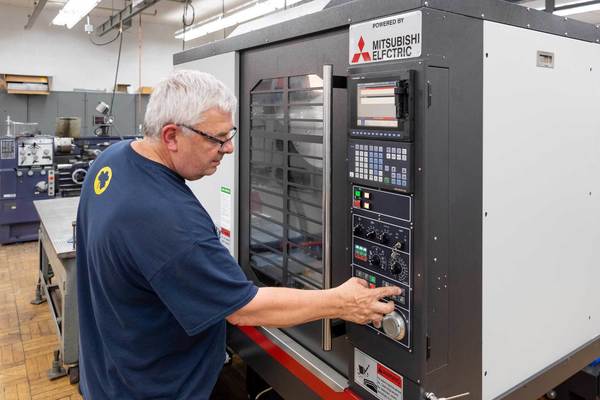 “We get to work on different projects almost every day,” he said. “Having the students and professors explain what the projects are and how they fit into scientific research is the best part—it has the feel of working in a Star Trek engineering group that includes physicists, engineers, chemists, and biochemists from all across campus.”

The core facility, which opened around 1950, boasts six computerized numerical machines as well as other mills, lathes, and specialty tools. Researchers who want to build new devices to support their discoveries work in collaboration with experts in the shop in an environment they say is both convenient and cost effective. Thanks to an Equipment Restoration and Renewal grant from Notre Dame Research, the shop invested in two new machines this year, and will be demonstrating those during a public open house from 11 a.m. to 3 p.m. Wednesday, Oct. 24.

“When going through the design process, I can work with the machine shop to address how to solve a design challenge or improve a part’s design and fabricability,” said Jonathan Crass, research assistant professor of physics. “I can get their input and expertise immediately rather than spending a lot of time designing it, fabricating it, and testing it, only to realize later that it doesn’t work.”

After the design process moves from sketches on the shop’s whiteboards to drawings generated in design software, the machinists, and their machines, get busy. To demonstrate, Futa picks up one of the 4 ¼ by 3-inch pieces of aluminum next to the Mitsubishi computer numerical control center (CNC) mill. He places it onto machine’s vise, closes the door to the unit, and presses a button to start a pre-programmed set of functions. 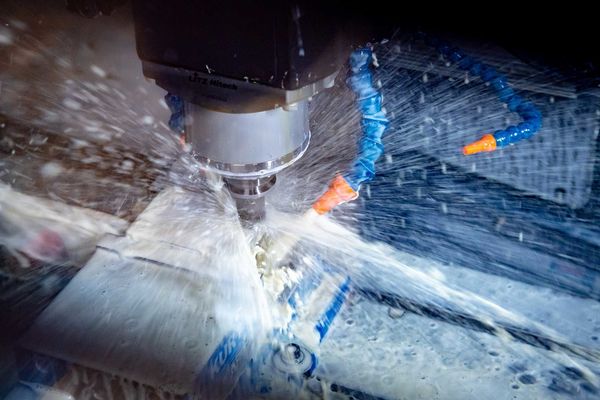 Whir, zap, spray. A turret carves grooves and holes into the plate while water sprays, which keeps the metal cool and washes away shavings. Each piece takes about an hour to machine on one side, but Futa doesn’t have to touch the machine during the process until the light atop the unit flashes green. 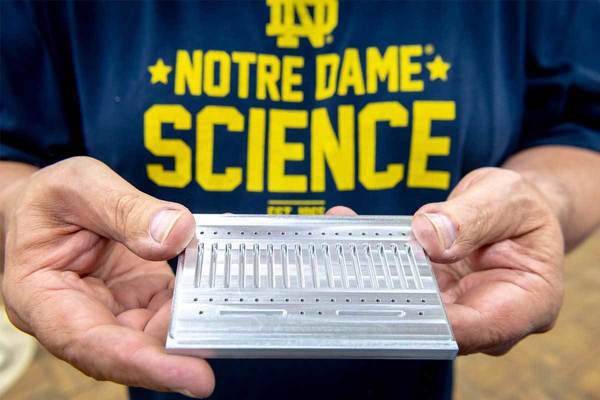 After the parts are machined, they are called patch plates, and are shipped to Pioneer Metal Finishing in South Bend to be anodized, a process that forms a black protective coating on the metal. All 200 plates then travel to Notre Dame’s QuarkNet center located next to the Robinson Community Learning Center on Eddy Street, where high school students and their mentors, under the direction of Mitchell Wayne, professor of physics, and Dan Ruggiero, QuarkNet laboratory senior program manager, thread them with fiber optics and incorporate them into boxes called optical decoder units. 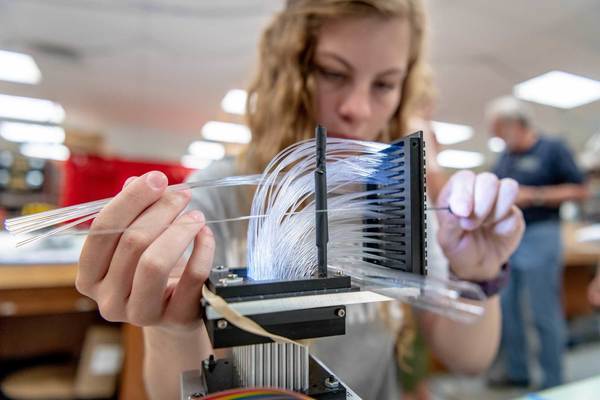 The units will be installed in Geneva, Switzerland, at the Large Hadron Collider at the European Organization for Nuclear Research (CERN). There they will remap the pattern of light entering a detector, transforming the light into an electrical signal that can be digitized and used to identify subatomic particles.

While that project involves creating parts to be installed in a detector of an enormous particle accelerator, the staff of the physics machine shop is also constructing pieces for a table-top-sized accelerator invented by another pair of researchers.

Daniel Bardayan, professor of physics, and physics doctoral student Drew Blankstein are creating an active target chamber, a type of particle detector that will help them study how exotic nuclei transform during supernovae explosions. After Blankenstein observed a similar type of device in use at Argonne National Laboratory, he designed his own in order to carry out his research.

To construct one component of this detector, the shop’s staff will hollow out the inside of a solid block of aluminum using the facility’s new wire electric discharge machine (EDM). Wire EDMs use wire and dielectric fluid, an insulating fluid that quenches electrical discharges, to cut metals. “They will be able to cut out the aluminum in one piece, which creates a lot less waste, and will achieve higher accuracy than before they had this machine,” Bardayan said.

While Wayne and Bardayan are employing the services of the machine shop to study tiny particles, Crass is working with Justin Crepp, associate professor of physics and director of the EDCF, to create equipment that will find large objects: Planets. Crepp’s concept, iLocater, will be the world’s first diffraction-limited Doppler radial velocity instrument, and will be installed at the Large Binocular Telescope in southeastern Arizona. iLocater aims to identify terrestrial planets orbiting in the habitable, or potentially life-supporting, zone of nearby stars. It will detect the movement of a star caused by an orbiting planet’s gravitational pull using a high-resolution spectrograph that corrects for the blurring effect of Earth’s atmosphere.

The staff in the Physics Machine Shop has been involved in that project since the prototype stages, Crass said. “For iLocater, they’ve created hundred of parts, and their experience has been invaluable.” 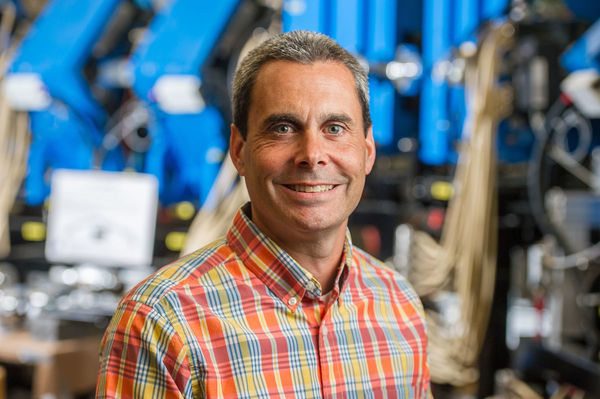 Although the machine shop open house is a celebration of its years of operation and the recent equipment upgrades, researchers including Bardayan don’t consider the machines the shop’s most valuable assets.

“It’s the people and having their expertise close by that has made the shop a tremendous resource for us,” he said.

Originally published by Deanna Csomo McCool at science.nd.edu on October 18, 2018.