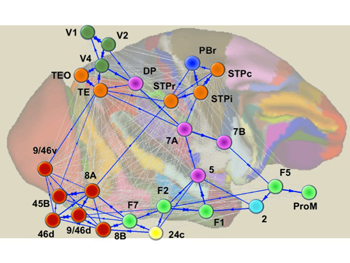 Research by Maria Ercsey-Ravasz and Zoltan Toroczkai of the Interdisciplinary Center for Network Science and Applications (iCeNSA) and Department of Physics, in collaboration with a group of neuroanatomists in France, has revealed previously-unknown information about the primate brain.

The researchers published an article in the journal Cerebral Cortex (Link: http://cercor.oxfordjournals.org/content/21/6/1254.full ) showing that the brain is characterized by a highly consistent, weighted network among the functional areas of the cortex, which are responsible for such functions as vision, hearing, touch, movement control and complex associations. The study revealed that such cortical networks and their properties are reproducible from individual to individual.

Ercsey-Ravasz, a postdoctoral associate, and Toroczkai, professor of physics, analyzed 70 man-years’ worth of data on macaque brains collected by a large group led by Henry Kennedy in Lyon. The Kennedy team injected ink tracers into a portion of the brain and scanned thin brain slices to track the movement of the chemical through the nerve cells’ branches, called axons, to the soma of the cells. Kennedy enlisted iCeNSA for its expertise at analyzing networks, which has also been applied to fields as diverse as the spread of disease and the social networks. Their analysis identified the consistency of connectivity among the areas of the brain.

Ercsey-Ravasz, in a study of the data that will be included in a later paper, also has demonstrated that the number of connections is greatest between areas that are closest, and the number declines in a consistent pattern as distance increases. The regularity of the patterns from animal to animal suggests that the connections are necessary, and the fewer long-distance connections likely are control switches that coordinate or modulate information exchange amongst the brain areas.

The study is part of a broader investigation of brain function and intelligence that has accelerated in recent years as researchers abandoned the once-promising analogy between computer circuitry and human intelligence, a project that stalled in the 1970s. “It turns out the brain is not just this beautiful circuitry you could just back-engineer,” Toroczkai says. “It is an amazingly complex system and this is why it is very hard to understand why it works.”

The adult primate brain contains 100 billion neurons with branches that connect at more than 100 trillion points. A top-down approach called functional decomposition, identifying bundles within the brain, helps overcome the sheer data volume. The macaque brain has 83 such areas, the human brain more than 120. “What we find is a network of connections between the functional areas,” Toroczkai says. “That’s important because we now have more detailed information about how the brain is wired on a large-scale, functional level.”

Toroczkai and Ercsey-Ravasz will continue research in the field with US and international collaborators, aimed at understanding how information received through the senses and converted to electric pulses is processed in the brain.  “It looks like there is some sort of general algorithm that is being run in this brain network,” he says. “The wiring is very strange. It is not something you would expect. It constitutes one of the major motivations for this study, the Holy Grail of this research, if you will.”