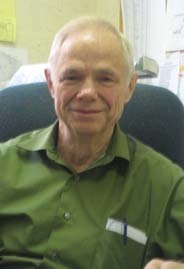 An array of detectors at the University of Notre Dame recorded the expected cosmic reaction to the solar storm earlier this week, an event that actually deflects certain outer-space particles from reaching the Earth. John Poirier, a professor emeritus of astrophysics and elementary particle physics, said measurements after the relatively weak solar storm showed a dip in the number of muons, which are produced when protons hit the upper atmosphere "This eruption on the sun releases a charged plasma," Poirier explained. "It travels from the sun to us. It's not anything like the velocity of light. It takes a couple of days to get here," while light takes only about eight minutes. "This plasma has in it a magnetic field, and the magnetic field, when it gets close to the earth, has a tendency to shield us from the cosmic rays that are coming from outside the solar system. We actually see a drop in intensity." The decline, called the Forbush decrease for the researcher who observed it about 75 years ago, started about 4 a.m. Thursday and continued until after 11 p.m. Thursday, said Poirier, who measured a decrease of 2.5 percent. "It was a pretty steep and large drop for us," Poirier says. Poirier maintains a set of 64 detectors in a field about the size of two side-by-side football fields on the north side of Notre Dame's campus. The detectors, each 39 inches square, are in individual huts 4 feet tall, 8 feet long and 8 feet wide. Project GRAND -- Gamma Ray Astrophysics at Notre Dame -- started more than a decade ago and soon shifted its focus from gamma rays to background material such as muons. "The long term hope of people like us around the world is to have stuff that's looking at these effects from the sun and can see them far enough out in space that we could have a network that would alert people as to this thing is coming," Poirier said. "That has yet to be realized." This week's solar storm came near the beginning of a new 11-year cycle that will produce some 200 storms, a few of which will be significantly more intense. Stronger storms can affect satellites and power grids.