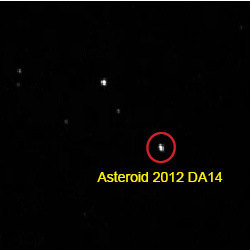 Over 50 people braved the cold temperatures to gather at the Jordan Hall of Science Observatory to catch a glimpse of the Asteroid 2012 DA14.   The 150 foot (50 meter) in diameter asteroid passed earth at 19,000 mph (31,000 km per hour) on Friday, February 15, 2013. The asteroid came closer to Earth than any satellite currently orbiting the planet and is the only celestial body to pass this close to Earth in recorded history.

Grant Mathews, professor of physics, and observatory assistant Colin Littlefield set up a CCD (charge coupling device) camera on the 11” telescope at the observatory to record images while several 8” telescopes were set up for the stargazers to see the asteroid and other objects in the sky.

CCD cameras are used to record electronic images of distant astronomical bodies. The video shown here is comprised of 37 images taken at the Jordan Hall Observatory over a three-minute span. The asteroid was moving across the sky at a rate of three arcsec per second (three degrees per hour) through the Constellation Ursa Minor (the Little Dipper).

Prior to the asteroid’s passing, a meteor moving at 33,000 mph exploded overhead in a remote area of Russia, bringing further attention to the asteroid. The two events are reported to be unrelated, but an amazing coincidence.

View the WSBT interview from Friday with Prof. Mathews about the asteroid.

Video of the asteroid passing: asteroid_2012_da14.avi