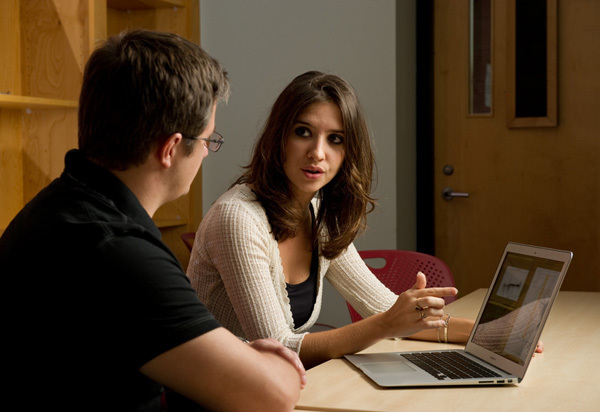 Julie Bourguet, a master's candidate at the Université Paris Diderot, is spending the summer at Notre Dame in an internship with Nicolas Lehner, research assistant professor in the Department of Physics.

Lehner's current project concerns the properties and evolution of the circumgalactic medium, the gas which surrounds galaxies and is used in the formation of stars. The timeline for gas consumption in star formation is far shorter than the age of the Universe; thus, the fuel must be recycled by processes not yet explained through observation or simulation. Accounting for this is an important goal of modern astrophysics.

Bourguet's role this summer has been to study the gas within the lines of sight to bright, distant quasi-stellar objects (QSOs), whose light originated several billion years ago. By examining the material in the foreground of the QSOs, she can determine the chemical makeup of the circumgalactic gas at different epochs and compare it to that of galaxies at the same epochs. Her involvement and enthusiasm have been key to moving the project forward.

The project uses high-quality data from both Earth- and space-based state-of-the-art telescopes, including the Hubble, Keck, GALEX, and the Large Binocular Telescope, of which Notre Dame is a contributing partner.

The early results support relatively untested cosmological simulations predicting that cold streams of gas flow into galaxies along dense intergalactic filaments. This observational effort was first led by Bourguet's project mentor, Joe Ribaudo, who defended his thesis last month at Notre Dame under the supervision of Chris Howk and Lehner. His early results have been submitted to the Astrophysical Journal.

Lehner recently presented the summer's findings at a conference in Durham, England. He has also been invited to present them next month at the University of Colorado in Boulder and the University of Wisconsin-Madison.