The Department of Physics at the University of Notre Dame inducted 10 undergraduate physics majors and 4 physics professors into Sigma Pi Sigma on Friday, April 13. Professor Peter Garnavich, faculty advisor of the Society of Physics Students, and Professor Mitchell Wayne, Department Chair, presented the inductees with their honor cords.

Sigma Pi Sigma is the official honor society of the physics profession. Through election to Sigma Pi Sigma, distinctive achievement and high scholarship in physics is recognized and celebrated. 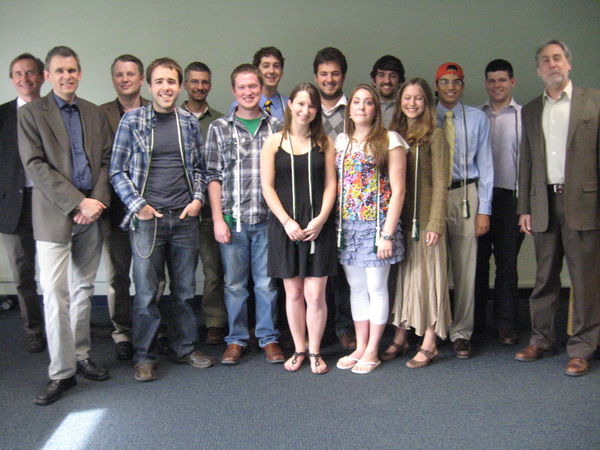 Sigma Pi Sigma exists to honor outstanding scholarship in physics; to encourage interest in physics among students at all levels; to promote an attitude of service of its members towards their fellow students, colleagues, and the public; to provide a fellowship of persons who have excelled in physics. Sigma Pi Sigma’s mission is not completed in the induction ceremony with the recognition of academic accomplishment. In the four dimensions of Honor, Encouragement, Service, and Fellowship, the mission of Sigma Pi Sigma takes a longer view.

The Society of Physics Students (SPS) was formed in 1968 with the union of Sigma Pi Sigma and the AIP Student Sections. Today Sigma Pi Sigma is housed within the SPS.