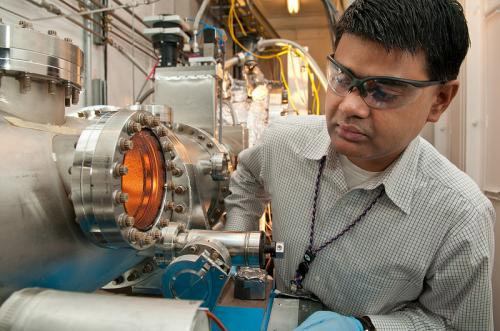 Bhoopesh Mishra is a 2006 Ph.D. graduate from the Department of Physics. He was advised by Prof. Bruce Bunker.

(Phys.org) -- If Bhoopesh Mishra had to pick a favorite food it would be seafood. Any type of seafood. Anytime. So when as a postdoctoral scholar he had a choice to pick a research topic, his taste buds had their say.

“There was a natural connection to studying mercury contamination,” said Mishra, a guest scientist at the U.S. Department of Energy’s (DOE) Argonne National Laboratory and a faculty researcher at the Illinois Institute of Technology. “Mercury contamination is a global problem, and when it finds its way into the water, it very, very rapidly makes its way up the food chain from small fish to large fish to our dinner tables.”

To cut back on this contamination, Mishra and fellow scientists from Argonne’s Biosciences Division identified the previously unknown process by which bacterium immobilizes toxic mercury in soil. Immobilization in soil keeps the mercury from becoming airborne and ending up in waterways where it builds up in fish. Using bacterium in this way can also reduce the natural spread of mercury and the need for large and expensive clean ups. While the research was conducted using Bacillus subtilis as a model bacterium this phenomenon is widespread among all soil bacteria.

“Airborne mercury reacts with the Earth’s ozone and hydroxyl radicals and is poured down as acid rain so you don’t have to be by any source point to have mercury contamination in rivers or lakes near you” Mishra said.

In areas of mercury contamination, such as Superfund sites, the naturally occurring ground mineral magnetite can transform mercury into a toxic, airborne form called elemental mercury. Scientists thought this conversion process was unavoidable until this study by Mishra and his co-authors. Details of how to use bacterium to prevent mercury from becoming airborne were published in the Journal of Environmental Science and Technology.