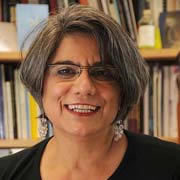 Ani Aprahamian, the Frank M. Freimann Professor of Physics, has been elected chair of the American Physical Society's Division of Nuclear Physics. APS is the second-largest organization in the field, chartered “to advance and diffuse the knowledge of physics.” It publishes a number of journals, conducts extensive education and outreach programs, and is active in public and governmental affairs. The Division of Nuclear Physics is composed of scientists and educators who study fundamental problems related to the nature of matter – the properties of nuclei and of their ultimate constituents, quarks and gluons.

Aprahamian's research interests lie in nuclear structure and nuclear astrophysics. Her current work relates to the elements heavier than iron, whose origin remains a scientific enigma; they cannot be formed by the normal nuclear fusion process in stars. It is thought that a neutron-rich explosive environment in the emerging shock front of a supernova may be responsible for the enhancement of the heavy elements, but experimental confirmation requires laboratory production of elusive, highly unstable nuclei in cutting-edge facilities. One such will be the Facility for Rare Isotopes Beams (FRIB) under construction at Michigan State University, for which Aprahamian serves as a member of the science advisory committee.

In addition to the above professional roles, Aprahamian has been both director of Notre Dame's Nuclear Science Laboratory and a former chair of the Department of Physics at Notre Dame. She is also the vice-chair of the National Academies' decadal review of nuclear physics (NP2010) and the co-chair of the standing Nuclear Science Advisory Subcommittee on Isotopes (NSACI), as well as chair of the Scientific Council for the GANIL research center in France.