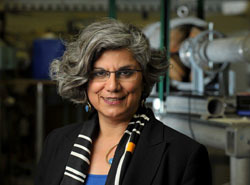 Ani Aprahamian, the Frank M. Freimann Professor of Physics, is featured in two videos commissioned by the National Research Council (NRC) in conjunction with its recently-published decadal review of the field of nuclear physics. Aprahamian is vice chair of the committee that produced the report. The videos, longer and shorter versions called "Exploring the Heart of Matter" present the scope of nuclear physics research, from the interior of the atom to the vast expanses of the universe, as well as its economic and social benefits, including diagnosis and treatment of cancer.

"Research in nuclear physics is built around very basic questions — how did the universe come to be? How was all the matter in the universe created?" Aprahamian says in both versions. "I think the innovations and the technical developments that have come out of it have been tremendous for society, but that wasn't the original reason we started to do this — it's the wonder of it all, trying to understand our world. A very human and really spectacular thing about us is that we wonder about our beginnings — why am I here? Why is the universe here? What does it all mean?"

The videos emphasize the rapid international development of nuclear physics research and the importance of cooperation among U.S. industry, government and universities to maintain a leading role. "Nuclear physics as a field or scientific interest has contributed a lot to basic science, but beyond that nuclear physics is largely responsible for the world that we live in," Aprahamian says in the longer version. "Nuclear physics has provided new technologies and innovations that have spurred the economy forward."

Click here to go to the NRC web site with the videos.