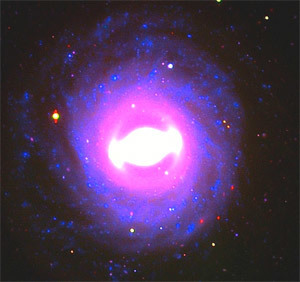 Astronomers have discovered light echoing off material surrounding a recent supernova explosion, SN 2009ig. The dust and gas that are reflecting the light are so close to the eruption center that it is likely related to the progenitor star. This discovery supports the theory that exploding white dwarfs become unstable from matter donated by large, non-degenerate stars.

The light echo seen from SN 2009ig is only the sixth discovered from a type Ia supernova, and it is the most luminous of the echoes.

An echo on Earth results when a loud sound is heard directly and again after being reflected by a wall to the listener. Because of the longer path length taken by the redirected sound, it is heard slightly later than the original noise. A light echo works the same way. Direct rays from the flash of a supernova are received at the Earth while some rays are scattered by particles in the host galaxy and redirected to the Earth. As with sound echoes, the time delay and light echo amplitude depends strongly on the distance between the source and the reflecting surfaces.

SN 2009ig was discovered less than a day after it exploded by the Lick Observatory Supernova Search. It was found in the “NGC 1015” galaxy at a distance of 127 million light-years in the constellation Cetus, the sea monster. SN 2009ig was the brightest supernova of 2009 and was well studied by amateur and professional astronomers around maximum brightness.

Observations with the Large Binocular Telescope and the Kitt Peak 4-meter telescope began in 2010, after SN 2009ig had faded by a factor of 10,000 from its peak brightness. “We planned to study how radioactive elements generated in the explosion decay with time, but we were surprised to see the fading abruptly halt. This was not a supernova we expected to produce a light echo,” said Peter Garnavich, professor of physics at the University of Notre Dame who is the lead investigator of the project.

SN 2009ig was classified as a normal type Ia event. Type Ia supernovae are thought to be thermonuclear detonations of remnant cores of stars known as white dwarfs. This type of supernova was used to discover that the expansion rate of the universe is accelerating, implying a mysterious dark energy dominates the content of the universe. Yet, the progenitors of type Ia explosions remain uncertain. “We have used these explosions as precise candles to measure cosmological distances. It would be great to know where they come from,” said Garnavich.