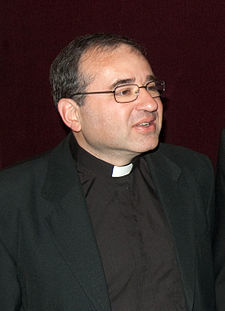 On Wednesday, February 15 at 7:00 p.m. in the Carey Auditorium of the Hesburgh Library, Fr. Jose G. Funes, S.J. will present "Why Science and Faith Matter to Each Other." This is sponsored by the Nieuwland Lecture Series.

Father Funes participates in the unique work for the Catholic church in Rome: the Vatican Observatory. In this lecture, he will speak about this crossroads of science and faith and how important it is to promote dialogue between them.

Born in Córdoba, Argentina, Fr. Funes joined the Jesuit order in 1985 and was ordained Catholic priest in 1995. In 2000, he became a staff astronomer of Vatican Observatory Research Group, and was appointed associate astronomer of the Steward Observatory at the University of Arizona. In 2006, he was appointed director of the Vatican Observatory by Pope Benedict XVI. He is a member ex-officio of the Pontifical Academy of Sciences.

The lecture is free and open to the public, and a reception will follow the event.