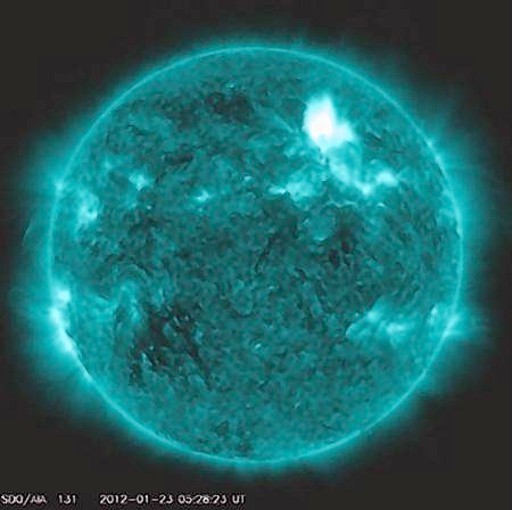 A massive explosion on the sun has made its way to Earth. In the past, solar flares have knocked out complete power grids and can affect our technology. So what can we expect from this one?

It's a phenomenon that's been happening on the sun for eons -- massive explosions send magnetic fields and atomic particles hurling into space. On occasion, they can hit Earth.

"So what's happened, there was a solar flare that ejected a large amount of material off the surface of the sun a couple of days ago, actually, and it's only now just arriving at the Earth," said Chris Howk, a physics professor at Notre Dame.

Howk says the solar material is traveling at 93 million miles per hour. He says not a lot is known about the flares but they do have to potential to do a lot of damage. They can knock out power grids and make cell phones useless. But while he says this storm is big, it's not that big.

"Even though this is the largest storm that we've had in several years, it's still not at the magnitude that it would affect our everyday lives," Howk said. "The biggest impact will be on satellites that are up above the Earth's magnetic field."

Howk adds that flight navigation may also be affected, so planes will be flying farther away from the north and south poles where the flares have the most impact.

The only thing we may see here is a light show in the sky.

"We won't see the storm directly," Howk said. "What we could potentially see is its impact on the northern lights. The protons that come in get trapped in the Earth's magnetic field and that magnetic field focuses them to the poles, where they interact with the atmosphere. And because there are so many more protons than normal, potentially the northern lights would be brighter and they might be seen more south than they normally are."

If the northern lights are affected, we would be able to see them for a couple of days.