University of Notre Dame astrophysicist Nicolas Lehner has led a team of scientists who have used NASA’s Hubble Space Telescope to identify an immense halo of gas surrounding the Andromeda Galaxy, the nearest major galaxy to Earth. The halo stretches about a million light-years from Andromeda, halfway to the Milky Way. The discovery will tell astronomers more about the evolution and structure of giant spiral galaxies such as the Milky Way and Andromeda.

“Halos are the gaseous atmospheres of galaxies,” said Lehner, the lead investigator. “The properties of these gaseous halos control the rate at which stars form in galaxies.” The gargantuan halo is estimated to contain at least as much mass in its diffuse gas as half of the stars in the Andromeda Galaxy. 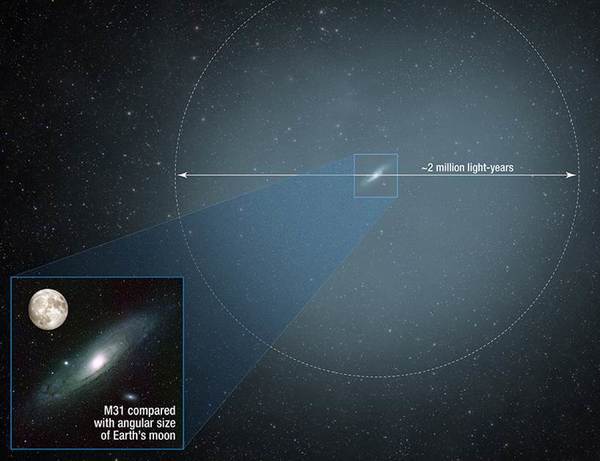 The Andromeda Galaxy, also known as Messier 31 or M31, is the most massive galaxy in the Local Group of galaxies that also includes the Milky Way and about 45 other known galaxies. M31 contains one trillion stars, about double the number of stars in the Milky Way. It is estimated to be about 25 percent more luminous than the Milky Way and lies 2.5 million light-years away.

The study demonstrates that the halo is a significant feature of Andromeda, having an apparent size about 100 times the diameter of the moon, yet the gas in the halo is “invisible.” To find and study the halo, the team looked at bright background objects whose light is affected by the intervening gas in the halo. Quasars, which are very distant star-like objects, are the ideal bodies for such a study as they are extremely luminous. They shine brightly due to the presence of gas falling onto supermassive black holes in their cores.

J. Christopher Howk, associate professor of physics at Notre Dame and co-investigator, said, “As the light from the quasars travels toward Hubble, the halo’s gas will absorb some of that light and make the quasar appear a little darker in just a very small wavelength range. By measuring the dip in brightness, we can tell how much halo gas from M31 there is between us and that quasar.”

Using the Hubble Space Telescope, scientists have observed halos around other galaxies, but never before has such a massive halo been observed so near to Earth beyond the Milky Way. That proximity allows the team to use 18 quasars projected at different distances from Andromeda to determine its presence and size. “This is a new milestone because typically only one quasar is used to probe the halos of galaxies beyond the Local Group,” said Lehner. “Here we have assembled a large sample of quasars that directly demonstrate the true extent of the halo of a single massive galaxy."

The team of scientists used Hubble’s unique capability to study ultraviolet light at high spectroscopic resolution where spectral features can be seen and accurately be modeled, revealing fundamental information about the nature and extent of the halo gas of galaxies. The team drew five years’ worth of data from the Hubble archive to conduct this research and hope to amass a larger sample of quasars observed with Hubble to study in more detail the intimate relationship between the galaxy and its halo.

According to the researchers, over Andromeda’s lifetime, nearly half of all the heavy elements made by its stars have been expelled far beyond the galaxy’s 200,000 light-year-diameter stellar disk. The scientists predict that if the Milky Way possesses a similar halo to Andromeda, the two galaxies’ halos may merge well before the two massive galaxies collide and eventually form a giant elliptical galaxy beginning about 4 billion years from now.

This study was published this week in The Astrophysics Journal, and written by Lehner, Howk and Bart Wakker from the University of Wisconsin Madison. The Space Telescope Science Institute (STScI) in Baltimore conducts Hubble science operations and is operated for NASA by the Association of Universities for Research in Astronomy Inc. in Washington, D.C.

The Hubble Space Telescope news center has released the story today at  http://hubblesite.org/news/2015/15

Originally published by Marissa Gebhard at news.nd.edu on May 07, 2015.