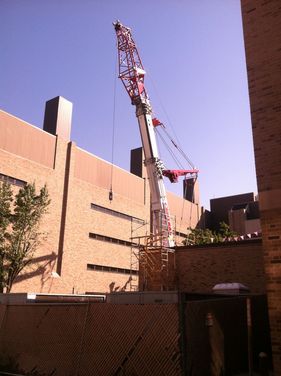 The University of Notre Dame has begun installation of a new nuclear accelerator in its Nuclear Science Laboratory (NSL), located in the Nieuwland Hall of Science. A huge crane has been set up to facilitate the transport for the accelerator unit to its final position in the center of the NSL research facilities. Construction will continue on this project for the next few months.

The new National Science Foundation (NSF)-funded 5 MV accelerator represents a major equipment upgrade for the University and is the first accelerator NSF has funded in nuclear physics in nearly a quarter century.

The new vertical accelerator will be housed inside a new 40-foot-tall tower located above the existing NSL in the center of Nieuwland. This location and the weight of the accelerator tank (nearly 20,000 pounds) require the use of a large crane visible from most parts of the campus. The structural steel frame for the tower will be installed during early October followed by the accelerator tank and then the concrete walls. Building construction will be complete by the end of 2011.

The accelerator will replace the KN accelerator and provide high intensity heavy ion beams for experiments at Notre Dame’s St. George recoil separator and will also increase the intensities for protons and alpha beams. The accelerator will be primarily used to expand the research program of Notre Dame’s Institute for Structure and Nuclear Astrophysics (ISNAP) and the Joint Institute for Nuclear Astrophysics (JINA), a Physics Frontier Center of NSF.

ISNAP is a university research center that operates the NSL at Notre Dame. The laboratory is built around three Van de Graff accelerators operating in different energy regimes and has a broad program in low energy physics. These three accelerators offer ideal conditions for experiments exploring basic nuclear physics questions about the quantum structure of nuclei or the origin of the elements in nuclear reaction processes in stars.

The NSL accelerators have the capability of producing intense particle beams of both stable and unstable nuclei of various types for research interests including nuclear reactions with radioactive ion beams (RIBS) and nuclear astrophysics associated with stellar explosions. The laboratory has a large number of national and international user groups, including US National Laboratories, who work with the local research groups.