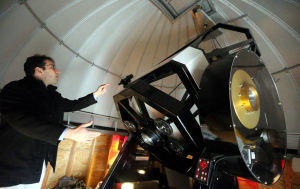 SOUTH BEND - Justin Crepp spends quite a bit of his time staring off into space.

But that's a good thing. Crepp is an assistant professor of physics at Notre Dame and has recently been awarded two prestigious designations from NASA for his work in looking for extrasolar planets, or planets outside our solar system.

Crepp is specifically looking for planets that may be habitable. One of his two recent designations as a Kepler Participating Scientist indicates he's working with a larger network of scientists. The other designation, an Early Career Fellowship, is one he alone holds in NASA's "Origins of Solar Systems" research program.

The Kepler observatory is part of NASA's Discovery program and involves the Kepler spacecraft that was launched into orbit in 2009 to send data to scientists on Earth -- free from distortions from Earth's atmosphere and other factors, according to Crepp.

Both of Crepp's designations come with grant money, and he's now heading a three-year project to design an instrument to attach to high-powered telescopes to detect and categorize exoplanets -- pretty unprecedented, according to Crepp.

One technique used by scientists to find exoplanets is the "transit" technique, Crepp explained. Essentially, they watch a star and wait for the light to dim, telling the scientists that an object, perhaps a planet, has passed in front of it. If they look long enough, they can see it happen again, use some of their math and physics skills, and find out information on its orbit and other characteristics.

Crepp's new instrument, called iLocater, will utilize the Doppler method -- similar to how police officers use speed radar -- to search for changes in frequency of the light, Crepp explained. It will work at unprecedented levels of precision enhanced by adaptive optics -- basically adjustable glasses on the telescope to focus its vision in reaction to distortion from Earth's atmosphere.

At first, the instrument will be used in conjunction with the Sarah L. Krizmanich telescope, a 0.8-meter reflective telescope that sits on the roof of Notre Dame's Jordan Hall of Science and was just dedicated in September, Crepp said.

Eventually, it will be used at the Large Binocular Telescope Observatory in Arizona, Crepp said, which is under significantly clearer skies than South Bend. He argued that the Large Binocular Telescope is the most powerful telescope in the world, featuring mirrors more than eight meters in diameter. Notre Dame is a research partner with the telescope.

Crepp does research at a large telescope about once every month or two, he said. They're located in places with high elevation, mostly clear weather and stable atmosphere, such as Arizona, Hawaii or Chile, to name a few.

"Most astrophysicists go to a telescope for a few days of observation and then spend months trying to make sense of it," Crepp said.

The instrument will be able to work with the large telescopes to detect planets down to the size of the Earth, Crepp said, and will help find out if they could sustain life through their atmosphere composition.

"This is why I'm highly motivated with this project," Crepp said. "I think it's profound to know that there might be life somewhere else in the universe."

Crepp said that he's only talking distances of tens of light years away -- not too far away, in outer space terms. Of all the observable stars, roughly 75 percent of them are smaller than the sun -- these are called m-stars. Of all the m-stars, about half have been found to have a planet in the habitable zone.

"It may be that most life in the universe is around m-stars. That's what gets me," Crepp said about his observations. "I'm consistently overwhelmed by it. If I'm not overwhelmed, I'm not doing my job right," he added, with a laugh.

Chris Kolda, chair of the Notre Dame physics department, said Crepp is one of the young leaders in his field.

Crepp has only been at Notre Dame for just under two years, but he's proven to be not only a great scientist, but a great teacher, Kolda added.

"Students find him very approachable," Kolda said. "I remember as a young professor that graduate students really do look to you as someone who's not that far removed from them."

Crepp currently is working with both graduate and undergraduate students on his instrument design and implementation. For the students, it's a chance to be involved in a rapidly developing field.

"It's hard to think of a more exciting field in astronomy than exoplanets and whether they hold other life -- it's hard to beat that," Kolda said. "Less than 10 years ago, they found the first exoplanet -- that tells you how fast the field is moving."

Crepp himself said he has discovered or been part of the discovery of more than 80 planets. The total number of exoplanets is around 700, depending on how you define "detection," Crepp added.

In three years, I predict that number will be just over 5,000," Crepp said. "The game now is to perform statistical analyses and also study individual planets, possibly resembling Earth, in as much detail as possible."