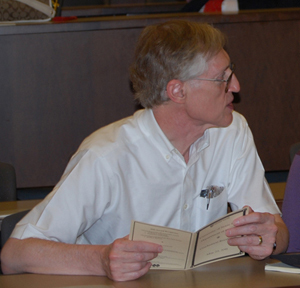 A co-recipient of the 2006 Nobel Prize for Physics, Mather is a senior astrophysicist in the Observational Cosmology Laboratory at NASA’s Goddard Space Flight Center and senior project scientist for the James Webb Space Telescope. He and George Smoot received the Nobel Prize for their development of the Cosmic Background Explorer satellite project that transformed the study of the early universe from a largely theoretical pursuit into direct observation and measurement. He and his wife, Jane, established a foundation with Nobel funds to support a variety of science initiatives.

The department hosted a reception for Dr. Mather on the Friday before graduation, and he attended the departmental ceremony in Jordan Hall.