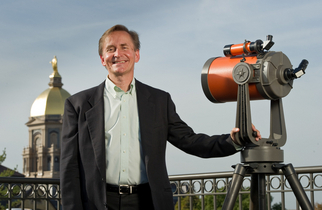 Notre Dame astrophysicist Peter Garnavich has been invited to the Nobel Prize Award Ceremony in Stockholm, Sweden on Dec. 10 when Nobel Laureates Brian Schmidt, Adam Riess and Saul Perlmutter will receive the 2011 the Nobel Prize in Physics for the discovery of the accelerating expansion of the Universe through observations of distant supernovae.

Garnavich, who wrote the team’s first paper that included supernovae data from the Hubble telescope, was a part of the High-Z Supernova Search Team led by Schmidt. Riess was a member of the same team, and Perlmutter was the leader of the rival Supernova Cosmology Project. The researchers demonstrated in the late 1990s that the universe is accelerating, leading to the now-standard understanding of dark energy in the universe.

The High-Z Supernova Search Team which was composed of about 20 members in 1994 was lead by Schmidt and was looking for very distant supernovae. “We were trying to measure the density of matter, which we thought was the only thing in the universe,” he said. “Researchers at the time were studying whether the universe would continue to expand or whether it would slow and eventually collapse. The first paper didn’t have enough supernovae to detect acceleration, but did show the universe would not ever recollapse.”

By the time Riess wrote the second paper, in 1998, the group had gathered sufficient data, including more supernovae data from the Hubble, to show that the universe’s expansion is accelerating. “This is a big surprise,” Garnavich said. “It requires something that Einstein had postulated, the cosmological constant, but then discarded after it was discovered that the universe is expanding. Now we call it dark energy because we don’t know what it is.” The group went on to study what dark energy might be, and Garnavich led a paper that constrained the variety of possible models that might produce the acceleration. Since then, researchers have cataloged hundreds of supernovae with ground-based telescopes and hope to collect significantly more data with space-based equipment to pursue understanding of dark energy.

The awarding of a Nobel Prize only 13 years after the discovery indicates the significance of the work, Garnavich said. “It was one of biggest discoveries in last 50 years,” he said. “It really did change the view of the universe. It has become kind of a standard model now to have matter in the universe dominated by some kind of dark energy. That’s not something people considered very likely just 20 years ago."