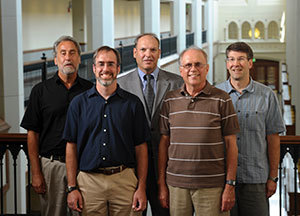 University of Notre Dame high-energy physicists have received a $2.4 million, three-year award from the National Science Foundation to continue their work on the CMS (Compact Muon Solenoid) experiment on campus and at CERN, the European Organization for Nuclear Research. The group’s work includes physics analysis central to the recent Higgs boson discovery.

The award is an increase of more than 10 percent above the group’s previous award, at a time when the NSF’s overall particle physics budget has been reduced by about 12 percent. “This grant renewal recognizes the accomplishments we’ve already made in CMS and will enable us to do even more,” said Mitchell Wayne, a principal investigator in the group. Other principal investigators are Michael Hildreth, Colin Jessop and Kevin Lannon. Randy Ruchti is a senior member of the group.

“The Notre Dame group has significant leadership roles in a number of key areas on the CMS experiment,” Wayne said, including building part of the detector, helping operate the detector while data was collected, developing software, analyzing data and working on upgrades to improve the detector’s performance.

“This award funds our base program, and adding in our other external awards for CMS, the group is bringing in well over $1 million per year in support of our CMS efforts,” Wayne said.