Notre Dame physicist Ani Aprahamian holds deep feelings for Armenia. Her grandparents were survivors of the Armenian genocide, and her parents were born in refugee camps in Beirut, Lebanon. So knowing that Armenia continuously ranks the highest in mortality rates per capita of six major types of cancers, she wanted to do what she could to solve the problem. 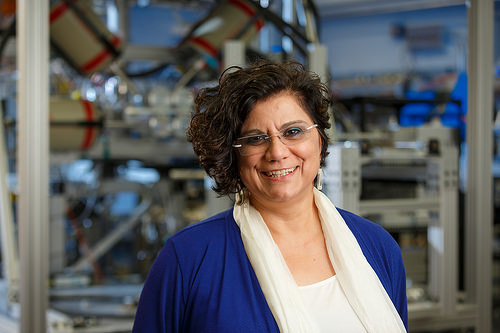 Two years ago Aprahamian, the Freimann Professor of Physics at the University of Notre Dame, was vacationing with cousins when she decided to visit the National Laboratory of Armenia to check on the progress of a newly purchased cyclotron. A cyclotron is a type of particle accelerator, and this one, a Cyclone-18, was purchased in 2012 and installed in 2014 at the former Yerevan Physics Institute. However, it hadn’t yet been operational. The small, approximately 6-foot long cyclotron at Yerevan was intended to provide short-lived radioactive isotopes that can be used for positron-electron tomography (PET) scans that diagnose and detect cancerous tumors. It was also to be used simultaneously for fundamental nuclear science research, nuclear astrophysics, and other applications of nuclear science.

When Aprahamian visited, she was shocked to discover that the cyclotron still was not operational. The reasons are many, but include the difficulty in obtaining the special materials, including high purity gases, needed to operate the cyclotron, and the difficulty of obtaining the material on credit from other European countries. All procurements required cash in advance payments.

One reason Armenia continuously ranks the highest in mortality rates for different cancers is the lack of accessibility of PET technology for early detection. A PET scan machine “picks up small tumors like nothing else can,” Aprahamian said. “It is really a powerful tool, with over 40 million treatments annually in the United States a year.”

Soon, thanks to Aprahamian and collaborators, the citizens of Armenia may get access to this important resource.

In mid-June, the team was able to produce the first beam from the cyclotron. By early July, they made fluorodeoxyglucose (FDG), a small amount of which needs to be injected into a patient before a PET scan. Because cancer grows at a faster rate than healthy tissue, cancer cells absorb more of the FDG than do healthy cells, which allows the tumor to be seen in scans.

“We are pleased that Professor Aprahamian has played a critical role in this important project,” said Mary Galvin, the William K. Warren Foundation Dean of the College of Science. “Diagnostics are an important component of proper health care, and the cyclotron, when used for medical purposes, may potentially save lives in the country as it detects tumors not easily found by other methods.”

This one cyclotron will produce enough medical isotopes to meet all the needs of patients in Armenia as well as surrounding countries, according to Aprahamian. “This is a game changer for Armenia,” she said.

Aprahamian was recently awarded a Fulbright Fellowship to continue her research and give lectures on medical physics and nuclear science to expand the expertise in this area in Armenia. Fulbright Fellowships are intended for intercultural relations, cultural diplomacy, and intercultural competence between the people of the United States and other countries through the exchange of persons, knowledge, and skills.

“It’s quite an adventure of a lifetime,” she said, adding that she is grateful to Notre Dame for giving her the opportunity to help Armenia in this way. “The Armenian people are warm, and I feel like everything I’ve done in my life up until now has led up to this. If I didn’t help, I couldn’t live with myself.”

Following the 2018 revolution in Armenia known as the Velvet Revolution, the new government will decide the role the cyclotron will play. Aprahamian has been invited to participate in the discussions with Nikol Pashinyan, the Prime Minister of Armenia, and others.

Originally published by Deanna Csomo McCool at science.nd.edu on July 17, 2019.