The U.S. Department of Agriculture has awarded a multidisciplinary team of University of Notre Dame researchers a grant of $500,000 to develop a new technology for tracking the movement of genetically-engineered (GE) organisms and their byproducts in the environment.

“Understanding and monitoring the dispersal of these organisms is a critical component of the safe and responsible use of transgenic technology,” says principal investigator Scott Egan, a Research Assistant Professor in Notre Dame’s Advanced Diagnostics & Therapeutics(AD&T) initiative and researcher in the university’sEnvironmental Change Initiative (ECI).

“Even though research has demonstrated that GE organisms can escape their intended range, and GE byproducts can disperse off of agricultural fields and throughout river networks, we currently lack the ability to rapidly and adequately track them,” adds Jennifer Tank, Professor of Biological Sciences at Notre Dame, and co-principal investigator (co-PI) on the project.

Genetically-engineered organisms are plants, animals, or microbes whose genetic material has been artificially altered, often through the insertion of genes from another species, for such reasons as to increase drought tolerance or enhance growth rates.

However, since the expansion of genetic engineering in the 1970s, there has been sometimes strong disagreement about many aspects of use of GE organisms, including their safety and the consequences of GE material entering the environment.

To help address the lack of understanding in these areas, the team will tackle two of the most pressing needs in GE detection: the detection and monitoring of the potential dispersal of GE fish and the byproducts of GE maize.

“One of our first targets of study will be GE salmon, which is currently under review from the FDA,” explains Jeffrey Feder, Professor of Biological Sciences at Notre Dame and co-PI. 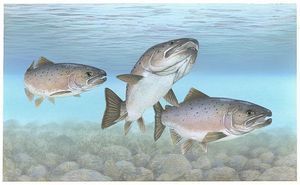 “GE salmon is an Atlantic salmon that has been modified by the addition of a growth hormone regulating gene from a Pacific Chinook salmon and a promoter from an ocean pout. These transferred genes enable the salmon to grow year-round instead of only during spring and summer and increases the speed at which the fish grows, without affecting its ultimate size or other qualities.”

David Lodge, Galla Professor of Biological Sciences and Director of ECI, adds, “Concerns have been raised about the possible escape of the GE salmon from rearing facilities and how that could affect native stocks, given previous studies showing that GE salmon are able to outcompete or hybridize with wild fish.”

The team will also look at how crop byproducts from GE maize that has been modified to be resistant to the European Corn Borer enters streams and rivers near the agricultural fields where it has been planted and harvested.

For both GE salmon and GE maize, the team will adapt current Light Transmission Spectroscopy (LTS) technologies, developed at Notre Dame, which have the ability to identify and accurately measure in real-time the size, shape, and number of nanoparticles suspended in fluid at higher sensitivity and with greater size resolution than competing technologies.

“We will harness GE-specific DNA or protein variation to identify biomarkers with a known size that will bind in the presence of the target GE organism or byproduct, which is easily detectible by LTS,” says one of the LTS developers, Steven Ruggiero, Professor of Physics at Notre Dame, and another co-PI on the project.

“The LTS technology exhibits the potential to be a field ready device that can generate rapid and highly accurate detection results, even when a target is at low densities” further notes Carol Tanner, Professor of Physics at Notre Dame and co-developer of the LTS instrument.

Dr. Emma Rosi-Marshall, co-PI and scientist at the Cary Institute for Ecosystem Studies in Millbrook NY, will host the first field studies on the efficacy of the detection effort using a state-of-the-art artificial stream facility to study environmental DNA and protein detection in the natural world.