Scientists working at the Large Hadron Collider (LHC), the world’s largest atom smasher, are expected to announce Wednesday (July 4) that they have evidence that the elusive Higgs boson particle exists.

Notre Dame researchers have long been involved in the search for the Higgs boson, the final piece of a model proposed four decades ago laying out the basic building blocks of matter in the universe. 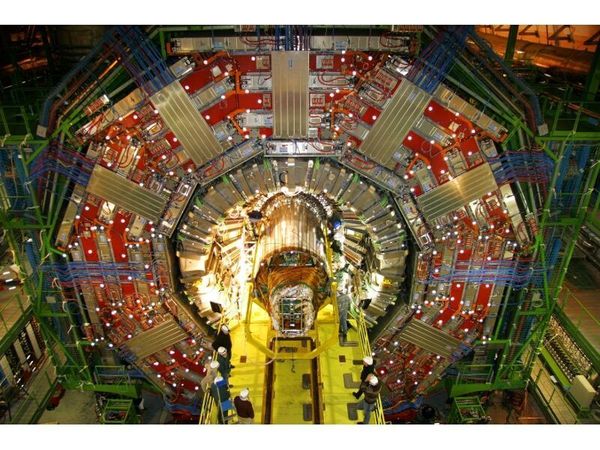 “We are involved in an experiment called the CMS (Compact Muon Solenoid) experiment that records the particle collisions generated by the LHC,” Colin Jessop, a professor of physics and team leader of the ND CMS group, said. “The experiment is conducted by a large international collaboration that includes many of the major research universities around the world. Notre Dame has a large group of five regular faculty (Mike Hildreth, myself, Kevin Lannon, Mitch Wayne and Randy Ruchti), two research faculty (Dan Karmgard and Nancy Marinelli), two postdoctoral researchers, 11 graduate students and a varying number of undergraduate students, two engineers and three technicians. We have been involved with the CMS experiment since its inception and have built parts of the detector and been involved in its commissioning and operation since the experiment switched on.”

The July 4 announcement by researchers at the European Organization for Nuclear Research, or CERN, which operates the LHC, isn’t expected to say that the Higgs boson has actually been “discovered.” Rather, CERN is expected to announce that the massive amount of data it has obtained represents the footprint of the Higgs.

“We are closely involved with the search for the Higgs boson,” Jessop said. “This is a quantum excitation of the Higgs field. The Higgs field is an energy field that hypothetically exists everywhere in the universe. All other particles with mass interact with the field to acquire the property of mass.

“The Higgs boson has eluded discovery since it was first proposed in 1963 by Peter Higgs, a British physicist. It is believed that this is because the Higgs itself has a large mass that requires the high energies of the LHC to produce it. If observed, it will be both a remarkable success of the predictions of the Standard Model of particle physics and yet also raise many questions about its detailed nature and interactions that can only be solved by further experiments at the LHC and elsewhere. The Standard Model is a theory that has very successfully explained the interactions of particles that make up the universe such as electron, protons and their constituent components called quarks. The Higgs is the cornerstone of this theory but has not yet been observed.”

“Essentially every local high school has contributed in some way to our research program, so I hope that our local community beyond just Notre Dame will feel like they are part of this work too,” said Jessop.

The research group at Notre Dame is funded by the National Science Foundation (NSF).

“We have been very fortunate to receive generous funding from the NSF and also strong support from within the University of Notre Dame,” Jessop said. “We are profoundly grateful for this.”

Other articles on this topic:
South Bend Tribune