University of Notre Dame researchers have pinpointed the rate at which the only known white dwarf pulsar is slowing its rotation, finally confirming that the star’s spin-down energy is sufficient to power the unique light variations observed from the system. 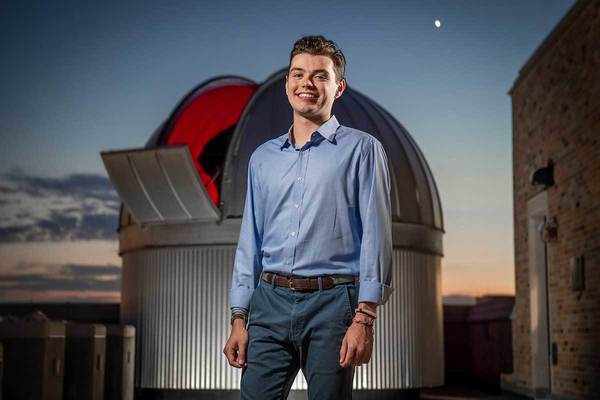 Until now, all the known pulsars were spinning magnetized neutron stars that converted their rotational energy into light. The binary system AR Scorpii is now confirmed as the first pulsar containing a rapidly rotating white dwarf, the remnant core of a low-mass star.

While the rotation rate of the white dwarf is seen to slow, it remains an exceptionally accurate clock. According to calculations, its rotation period will decrease by only one second over 40,000 years. Still, the spinning white dwarf will run out of rotational energy in just a few million years.

Robert Stiller, ’18, studied the AR Scorpii system using the Sarah L. Krizmanich Telescope atop the Jordan Hall of Science under the guidance of Peter Garnavich, professor and Physics Department Chair, and Colin Littlefield, an astronomer in the department. The team observed the pulsar for 39 hours over a period of three years, tying it with additional data collected by two groups of amateur astronomers. Their paper measuring the white dwarf’s spin-down rate was published September 11 in Astronomical Journal.

AR Scorpii, which is 384 light-years away, is a binary star system that consists of a cool, dim star interacting with a rapidly spinning, highly magnetic white dwarf. Pulsars emit beams of electromagnetic radiation generated by the rapid rotation of their strong magnetic field. From Earth, the radiation can be seen as pulses of light, similar to the rotating beacon of a lighthouse. AR Scorpii’s pulses are seen at intervals of every 1.97 minutes from telescopes on Earth.

Despite the rather modest spin-down rate for the star, it is able to convert its rotational energy into 300 tera-terawatts of power. This the same amount of energy output by fusion processes in the Sun every second.

AR Scorpii was thought to be a solitary star until 2016, when researchers discovered the highly variable flashes of light.  They had calculated a spin-down rate they believed was large enough to power its jets of electromagnetic waves, but subsequent research contested those calculations and suggested that further study was needed to pinpoint the exact rate. Stiller, lead author on the current study, began observing the star through the Krizmanich telescope in the summer of 2016. Using a sensitive electronic camera attached to the telescope, he and other Notre Dame researchers took long sets of images in the spring and summer, when the star was visible above the horizon. Exposures as short as two seconds were needed to capture the rapid flashes of the pulsar. The time of each flash was recorded and used to search for the tiny change in the spin rate of the star.

Until the discovery of this white dwarf, the only known pulsars were neutron stars, which have much greater masses and spin rates. White dwarfs are formed when a star about the size of the sun runs out of energy and gravity compresses the core to about the size of the Earth. Neutron stars are formed when massive stars die in catastrophic supernovae events, with their cores collapsing to the size of a city. If they are highly magnetized, neutron stars become giant electric generators, driving electric currents to emit radiation.

Binary star systems containing a cool red star and a white dwarf, like AR Scorpii, are called cataclysmic variable stars and use gravity to produce energy. Gas from the cool star speeds up as it falls on the white dwarf, converting gravitational energy in light. But the white dwarf in AR Scorpii converts its spinning into light energy in a way similar to an electric generator, as shown by the latest research at Notre Dame.

“What is exciting about AR Scorpii is that there are no other stars like this one,” Garnavich said, “And there remains the mystery of exactly how it turns its rotational energy into the light pulses we see.”

Stiller said he was grateful for the opportunity to complete an undergraduate research project that answers an astrophysical question many in the field had debated. Using the telescope was a highlight of his years at Notre Dame, he added.

“I’m really grateful for the Krizmanich family because while other schools have telescopes, they’re usually off campus,” he said. “But in literally five minutes from Dunne Hall I could be at the telescope doing my observations. I also learned more by having access rather than having to send scripts to another telescope somewhere else.”

Originally published by Deanna Csomo McCool at science.nd.edu on September 11, 2018.