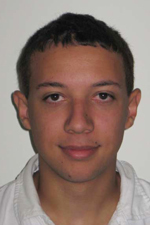 Doug Berry is a sixth-year graduate student in high energy physics working with Professor Colin Jessop and Research Professor Nancy Marinelli at the University of Notre Dame. He is completing his dissertation on the recent discovery of the Higgs Boson at the European Particle Physics laboratory (CERN). He has been based at CERN for the past three years working on the Compact Muon Solenoid (CMS) experiment focussing on the commissioning and operation of the Electromagnetic calorimeter and using this device to search for the Higgs Boson.

CMS is a detector that records the high energy proton collisions produced by the Large Hadron Collider (LHC). The Higgs Boson is a long sought after particle that is critical to understanding the origin of the mass of all particles. Previous experiments had insufficient energy to produce the Higgs Boson, which is approximately 125 times the mass of the proton, in sufficient quantities to detect it. The LHC, operating at 8 TeV center of mass energy, was able to produce the Higgs Boson approximately once every 3 billion collisions. The decay mode of the Higgs Boson in which it decays to two photons was one of two different modes in which the Higgs Boson was observed. The calorimeter detects photons with high resolution and  has been used by Doug to search for the Higgs Boson decaying to two photons along with his collaborators at CERN.

Berry has contributed to many aspects of the calorimeter including assessing the effects of radiation damage and refining the software used to monitor the quality of the data being taken. He was responsible for producing the reduced data sets that he used with a team of collaborators to search for the Higgs, for algorithms used to locate the precise position of the decay of the Higgs within the detector, for evaluating the systematic uncertainties in the photon detection, and for evaluating the statistical significance of the observation. During Berry's three years at CERN he has been a GK12 and NSF fellow and will graduate in May of 2013.