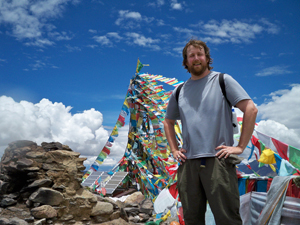 Marcus Hedahl, who graduated from Notre Dame with a bachelor’s degree in physics in 1995, has won a Charlotte W. Newcombe Doctoral Dissertation Fellowship from the Woodrow Wilson National Fellowship Foundation. Hedahl, a doctoral candidate in philosophy at Georgetown University, is one of 21 Fellows selected from 585 applicants. His dissertation, Owing It to Us: Duties Directed to One’s Own, deals with the duties that individuals owe to groups of which they are a member.

Hedahl went to work for NASA after he graduated from Notre Dame, then accepted a commission as a U.S. Air Force captain until 2006. He earned a master’s degree in philosophy from the University of Wisconsin – Milwaukee. Hedahl said his experience at Notre Dame – both rigorous big-picture study of physics and the campus emphasis on community – prepared him for the study that led to the dissertation.

"What drew me to physics were the fundamental questions about the way the world works and the way things operate; those same questions later drew me to philosophy” he said. “I definitely think both my scientific background and my time at Notre Dame have helped me in my philosophic studies. I think my scientific background helped develop the analytic skills and sense of inquiry and imagination required for modern philosophy. And, I think my time at Notre Dame as well as my time in the service, both with strong senses of community, has fundamental shaped my approach to philosophy."

His research involves the moral relationship between groups and individuals, for example how individuals can be responsible for the large-scale collective harms such as those stemming from climate change and how groups such as corporations can be responsible for the actions of individuals. The 12-month, $25,000 Newcombe award supports Ph.D. candidates in the humanities and social sciences who are addressing questions of ethical and religious values.