Every time senior physics major Erik Peterson looks at the stars, he travels back in time. Any light emitted from a star can take centuries to reach Earth, so when we stare up at the sky, we witness events that happened hundreds of years ago. 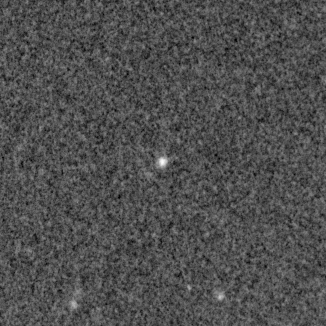 An example of a plate Peterson analyzed.

Peterson’s research focuses on one such star system called AR Scorpii (AR Sco), which is 383 light years away. Discovered in 2016, this set of two stars “pulsates,” or emits a flash of light four times brighter than its usual state every two minutes. AR Sco is unusual because it is the only binary star system that contains a white dwarf pulsar, which is the dense remains of a larger star that has used up most of its fuel.

“AR Sco is a ‘unicorn,’" Professor Peter Garnavich, chair of the Department of Physics, explained. “Currently there is only one of these kind of stars known, so it is important to understand all of its characteristics.”

When Peterson expressed interest in doing research during his senior year, Garnavich recommended this challenging project. Peterson studied AR Sco with Garnavich and researcher Colin Littlefield for about a year, and he will publish a paper on his research soon. Next fall, he will continue his study of stars in graduate school, where he will pursue a doctorate in astrophysics.

Thanks to an effort by the Harvard College Observatory to digitize its collection of images of the night sky, preserved on metal plates, Peterson can collect data on the star from far longer ago than its relatively recent discovery. He began examining pictures of AR Sco from as early as 1902, and he can obtain surprisingly precise measurements from this century-old evidence.

Using the small changes he detected in AR Sco’s position, Peterson reported that the two stars are speeding up as they orbit each other. This result confirms his initial assumptions. It aligns with the theory proposed by Albert Einstein that as celestial objects rotate around each other, they emit gravity waves, travel faster, and come closer together. “I never thought I would be looking at gravitational radiation,” Peterson said. “This early, looking at what Einstein predicted is awesome.”

Yet Peterson’s research also challenges assumptions in the astrophysics community. At a conference, one of the leading experts on AR Sco told Peterson that he did not think he could find any new information from the data set on the star. Peterson showed him that these plates allowed him to gain even more insight into this unique binary pulsar.

Peterson hopes that his research has practical applications beyond AR Sco, because it demonstrates how this old evidence can inform new astrophysical discoveries. Reflecting on his innovative research, he concluded, “I don’t think that people understood how useful [these plates] can be.”