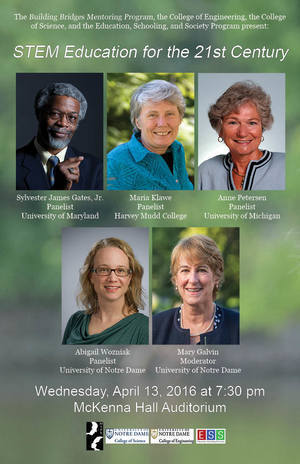 The University of Notre Dame will host a panel discussion titled “STEM Education for the 21st Century” on Wednesday, April 13, 2016. Mary Galvin, Dean of the College of Science, will moderate this national panel which features Sylvester James Gates, Jr., Maria Klawe, Anne Petersen, and Abigail Wozniak. The event is hosted byMulticultural Student Programs and Services’ Building Bridges Lecture Series, theCollege of Engineering, the College of Science, and the Education, Schooling, and Society Program.

Sylvester James Gates, Jr. is the John S. Toll and Distinguished Professor of Physics at the University of Maryland where he also serves as Director of the University’s Center for String and Particle Theory. He has authored/coauthored more than 180 published papers and has been featured in several series hosted by PBS. He received his PhD from the Massachusetts Institute of Technology. Gates has served as a consultant for the Department of Defense, the Department of Energy, and the National Science Foundation. He is a member of President Obama’s Council of Advisors on Science and Technology.

Maria Klawe is the President of Harvey Mudd College in Claremont, California. She is the first woman to lead the College since its founding in 1955. Previously she served as Dean of Engineering and Professor of Computer Science at Princeton University. She received her PhD from the University of Alberta. Klawe is a renowned speaker about diversity in STEM and she is devoted to improving K-12 science and mathematics education.  In 2014 she received the 2014 Women of Vision ABIE Award and was ranked 17 on Fortune’s 2014 list of World’s Greatest Leaders.

Anne Petersen is a Research Professor at the University of Michigan’s Center of Human Growth and Development. She is also the Founder/President, of Global Philanthropy Alliance. She received her PhD from the University of Chicago and has authored 12 books and more than 300 published articles. Included among many of her previous appointments, Petersen has served as Deputy Director of the National Science Foundation, President of the American Psychology Association, Associate Director for the MacArthur Foundation Health Program, and co-founded the Society for Research on Adolescence.

Abigail Wozniak is an Associate Professor of Economics at the University of Notre Dame and serves as a Faculty Research Fellow at the National Bureau of Economic Research, and Research Fellow at the Institute for the Study of Labor. She received her PhD from Harvard University and her work has been published in several economic journals and featured in many press outlets including The New York Times, The Wall Street Journal, The Huffington Post, and Businessweek. Wozniak formerly served as senior economist for President Obama’s Council of Economic Advisers.

Mary Galvin is the William K. Warren Foundation Dean of the College of Science at the University of Notre Dame.  Previously she served as Director for the Division of Materials Research at the National Science Foundation, and as a distinguished member of the technical staff at Bell Laboratory. Her PhD is from the Massachusetts Institute of Technology. Galvin has coauthored works in the areas of organic and inorganic materials. She is a fellow in the American Physical Society and serves on the board of the Materials Research Society, and the board of Chemical Science and Technology.

This event, which is free and open to the public, will begin at 7:30 pm in McKenna Hall Auditorium.