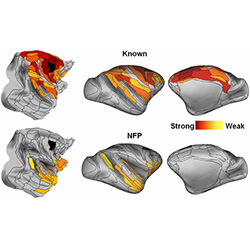 Zoltán Toroczkai, professor of physics and concurrent professor of computer science and engineering, has co-authored a paper in March 26 issue of Proceedings of the National Academy of Sciences. The paper, “The role of long-range connections on the specificity of the macaque interareal cortical network,” was written in collaboration with a group of neuroanatomists from Lyon, France.

The group investigated the influence of interareal distance on connectivity patterns in a database obtained from the injection of retrograde tracers (experiments performed by the French group) in 29 areas distributed over six regions in the brain—occipital, temporal, parietal, frontal, prefrontal, and limbic.

Their findings showed that long-distance connections in the primate brain make important contributions to the specificity of the cortical networks. Although the axons of these neurons are only about one micrometer thick (10-6m), they can make connections across the whole brain reaching to areas many centimeters away. The weight of the pathways that link the cortical areas likely plays an important role in determining the physiological function of each cortical area. Long-distance connections are in low abundance and also weak, but they are highly consistent across brains. Their observations suggest that these connections have a prominent role in brain-wide communication and information integration.

Toroczkai came to Notre Dame in 2006 from Los Alamos National Laboratory where he was the deputy director of the Center for Nonlinear Studies. His research interests include complex networks, nonlinear dynamics and chaos, fluid dynamics, statistical physics, theory of computing, neuroscience and biological population dynamics. He was the founding director and is currently a co-director of the Interdisciplinary Center for Network Science & Applications (iCeNSA), Notre Dame’s research center that was organized to resolve network science problems in social, biological, biochemical, physical, environmental, financial, technical, and defense systems. Toroczkai was named an American Physical Society Fellow in 2012.