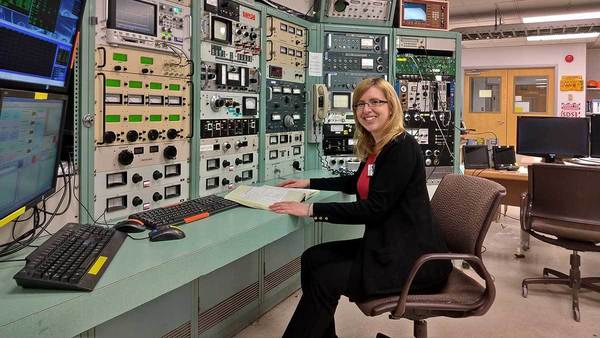 Scientists at the University of Notre Dame will help train the next generation of leaders and stewardship scientists to ensure the safety and reliability of the country’s nuclear stockpile. The U.S. Department of Energy’s National Nuclear Security Administration (NNSA) recently announced a five-year, $10 million grant to establish the Center for Excellence in Nuclear Training and University-based Research (CENTAUR).

“Most nuclear weapons in the U.S. stockpile were produced during the 1950s and 1960s, and they were not designed to last indefinitely,” said Anna Simon, assistant professor of experimental nuclear physics at Notre Dame. “Scientists and engineers trained in low-energy nuclear physics are key to the program. They’re trained to work with a variety of radiation detectors, understand the nuclear processes that are important to addressing the stockpile, and write simulations that predict the behavior of stockpile material.”

According to the U.S. Department of State’s Federation of American Scientists, an inventory conducted in 2017 showed the U.S. had an active stockpile of 4,038 nuclear weapons, including deployed strategic and tactical warheads and non-deployed warheads. Another 2,800 warheads have been retired.

Without nuclear testing, said Simon, nobody knows how a warhead will behave, or if it will trigger nuclear fission when used. The shielding material of the warhead deteriorates over time due to radiation and aging. The goal of the stockpile stewardship mission is to create models that will consider all variables to determine the quality of the weapon without testing.

Simon’s role within CENTAUR will focus on calculating cross-sections of the neutron capture reactions on rare earth nuclei. Rare earth elements are the products of uranium fission, and knowing their cross-sections allows for more accurate modeling of the behavior of the stockpile material as they continue to age. Acquiring data from those calculations can also aid with identification of material used in nuclear weapons at the site of a nuclear explosion.

Simon has been conducting experiments using high-resolution gamma-ray detectors and particle detectors to identify the properties of the nuclei produced during nuclear reactions and observe their decay via gamma-ray emission in collaboration with the researchers at Texas A&M and Lawrence Livermore National Laboratory.

Funding for Simon’s work includes an individual grant, also from the NNSA.

Originally published by Jessica Sieff at news.nd.edu on August 07, 2018.