Umesh Garg, professor of physics, has been appointed to the Committee on Constitution and Bylaws (CCB) of the American Physical Society (APS) by President-elect Malcom 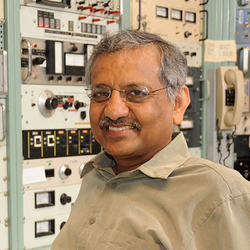 Beasley. Garg’s three-year term will begin January 1, 2014.  The CCB consists of six appointed members who are responsible for recommending actions concerning the Constitution and Bylaws of the society and of its divisions, topical groups, forums, and sections.

Garg’s research interests include experimental investigation of compressional-mode giant resonances and exotic quantal rotation in nuclei. The compressional-mode giant resonances provide the only direct experimental measurement of the nuclear incompressibility, a fundamental property of nuclear matter that is crucial to understanding of a number of nuclear and astrophysical phenomena, including strength of collapse in supernovae explosions, collective-flow in high-energy heavy ion collisions, and properties of neutron stars—the “largest nuclei” that exist in nature. Prof. Garg’s group has been investigating the Isoscalar Giant Dipole Resonance, an exotic compressional-oscillation, also referred to as the “squeezing mode.”

The mission of APS is to advance and diffuse the knowledge of physics through outstanding research journals, scientific meetings, education, outreach, advocacy and international activities. There are over 50,000 physicists in the society who come from academia, national laboratories and industry across the globe.