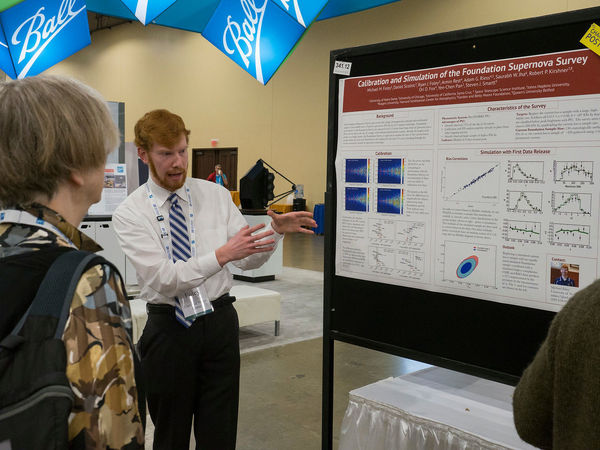 Undergraduate physics major Michael Foley received a medal at the Chambliss Astronomy Achievement Student Awards poster competition, which occurred in January during the 229th AAS meeting in Grapevine, TX. His poster was titled, “Calibration and Simulation of the Foundation Survey.”

Foley has been working on the Foundation Supernova Survey under the mentorship of Dr. Dan Scolnic and Dr. Rick Kessler of the University of Chicago Kavli Institute for Cosmological Physics. This is a new low-redshift supernova survey that uses the Pan-STARRS telescope to measure distances of Type Ia Supernovae in the Hubble flow. It will be used in the coming years to further constrain the Hubble constant and fulfill the WFIRST low-redshift sample requirement for measurements of dark energy. Foley has been working particularly on the calibration and simulations of the survey, and he presented that work, along with a few aspects of their first data release, at the American Astronomical Society meeting in this poster.