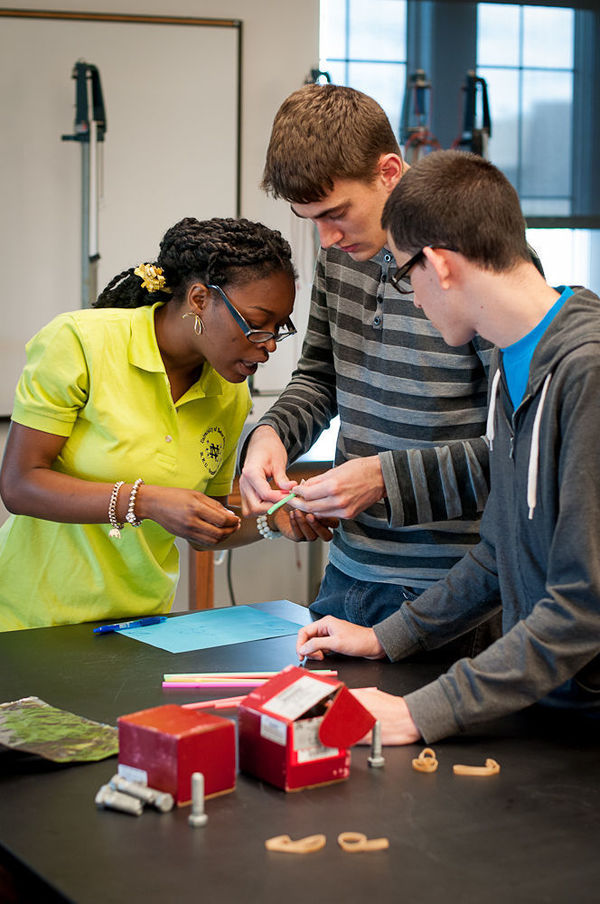 Most people think that 2013 was an off year for the Olympics, but not at Notre Dame. Students in the Physics section of the Research Experience for Undergraduates (REU) programs at Michigan State University, Purdue University and the University of Notre Dame competed in the Physics Olympics on Monday (July 29) in the Jordan Hall of Science. Comprised of undergraduates from across the country, the REU programs at the respective universities give students opportunities to work with faculty and graduate students on research and other projects throughout the summer.

Divided into twelve teams of three, players competed in three different events: Faraday, Bungee, and Raft. At Faraday, students created an electromagnet using only copper wire, two batteries and a couple nails. Team Gluon moved the most paper clips from one table to another with a score of 166 and took first place in the event.

Upstairs, contestants tied rubber bands together with a 500-gram bag of sand attached, and then dropped the contraption off the third floor balcony in Bungee. The quickest team to land their bag just above the floor, Team Gluon, won with a time of 19 minutes, 50 seconds.

Team Gluon won first overall, followed by Team Electron. Team Diode and Team Ion tied for third. “It was a lot of fun,” a senior in the Notre Dame program from Concordia College said.  “It was a bit more challenging than I thought it would be, but I really enjoyed it.” Umesh Garg, professor of physics, led the competition.