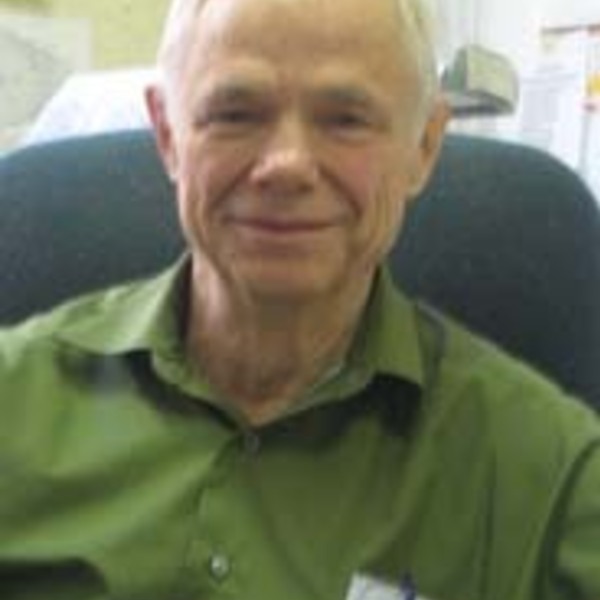 Prof. Poirier's doctoral thesis was supervised by W.K.H. Panofsky, "Positron electron scattering at 200 MeV," an elastic scattering experiment suggested by Burton Richter. It was the first such experiment conducted at Stanford’s HEPL prior to the construction of SLAC. The results agreed with Bhabha's theory and showed the necessity of the annihilation term among the Feynman graphs.

At Notre Dame, Poirier is an astrophysicist studying cosmic rays operating an extensive air shower array utilizing position sensitive multiwire detectors. The 100m x 100m array is located just north of campus and is comprised of 64 detector stations. Each station has 8 proportional wire planes capable of measuring each track’s angle to 0.25 degrees in each of two orthogonal planes.

The cosmic ray array studies the properties of primary cosmic rays in the energy region above 10 billion, or 10 giga, electron Volts (GeV) using data from single track muon secondaries. The detector identifies each secondary track as a muon or an electron. By comparing the counting rate of muon secondaries with solar activity, a six sigma coincidence shows the sun is capable of accelerating protons to energies of >10 GeV. Ultra-high-energy cosmic rays, primary energies above 100 trillion electron volts (TeV), are studied simultaneously using the extensive air shower data of secondary electrons and muons in time coincidence with adjacent detector stations. The energy of the primary particle is obtained from the total number of detected secondary particles. Since gamma rays are undeflected as they travel through the magnetic fields of interstellar space, their primary angle pinpoints their stellar origin.

Interest in relativistic jets resulted in a first post-Newtonian calculation of a general relativistic effect that shows a non-utilized gravitomagnetic force due to moving masses is significant in the production of these jets in addition to the ordinary magnetic effects due to moving charges.